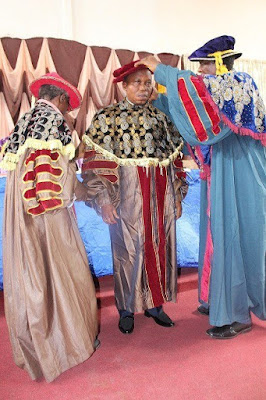 Paul Emeka can Only Have Peace in the PRISON CELL

Paul Emeka cannot have peace in the Church because Assemblies of God Nigeria has Suspended,Dismissed and Dis-Fellowshiped him from the Church

Paul Emeka asked his Lawyer Barr J.U AJii to Appeal the Order,they appealed it and when the Court resumed they brought an Application seeking for A Stay of Proceeding pending the outcome of his Appeal against the Order by Justice Umar

Section 306 of the Administration of Criminal Justice Act (ACJA) 2015, prohibited a stay of proceedings in a criminal matter at the trial court on account of a pending appeal.

At the Resumed Sitting of the Court Today, Barr  J.U AJII the Lead Counsel to Rev Dr Paul Emeka was no were to be found in the Court Barr R.O Agama a seniour Member of his legal Team did not as well Come

As The Presiding Judge of the Upper Area Court Justice Umar Yusuf Kargarko was about to give his rulling on the Application for stay of execution brought by Rev Dr Paul Emeka,the Court Clerk brought to the Attention of the court a letter written and smuggled into the File of the Court by Lawyers of Rev Dr Paul Emeka asking for Adjournment of the Ruling from Today to 27th or 29th of June 2016

Their Reasons for Requesting for Adjournment are:

That Barr Agama A Lawyer in their chambers,is appearing before the Court of Appeal for another case in Kaduna Division

But However,Counsel to the Incorporated Trustees of Assemblies of God Nigeria Barr Ifeanyi Nwaeze argued as Follows:

That 25th May 2016 was first agreed by all Parties and yet one of the accused Lawyer,Barr Agama chose the option of going to Kaduna,Barr Ifeanyi told the Court,that the letter was a technical plot to Postpone the Evil Day

That the Content of the letter is deceitful because the had all other lawyers in the Chambers other Barr Ajii and R.O Agama who could appear on their behalf to take the ruling

After Listening to Barr Ifeanyi Nwaeze,the Presiding Judge Justice Umar Yusuf Kargarko declared that that he was not afraid to deliver his ruling,but that for the interest of Justice he will adjourned his ruling till on the 27th of June 2016

Paul Emeka the Game is Up

Promise Uzoma Okoro is a member of Assemblies of God Nigeria