Home Uncategorized Paul Emeka: The Game Is Over,Surrender In Peace or In Pieces
Spread the post 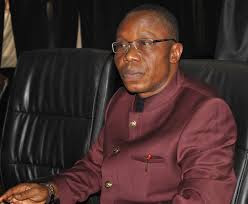 Paul Emeka,the Ex-communicated Former General Superintendent of Assemblies of God Nigeria will never believe if anyone had in 2014 and 2015 told him,that the game will change in 2016 against Him.

Rev Dr Paul Emeka bought a Fake Professorial Certificate from a Man in Aba,Abia State and claimed it was awarded to him by the University Of Derby in London in 2005

Rev Dr Paul Emeka was Suspended,Dismissed and Disfellowshipped by the General Council of Assemblies of God Nigeria for violating several sections of the Constitution and Byelaws of the Church especially the Chater Twelve which prohibited anyone taking the Church to Court for whatever reason.

Immediately after his Suspension,Paul Emeka said he will never obey such,he instigated some Leaders,Pastors and Youths against the General Council of Assemblies of God Nigeria

But the APEX Court ordered him to file his brief by fire by Force and went ahead to give the Case accelarated Hearing which means that certainly the Court will deliver Judgement within the next 90days because all the papers that needed to be filed has been filed before the Supreme Court by both parties.

On Wednesday 25th of May 2015,Rev Paul Emeka in a bid to delays the proceedings at the Upper Area Court asked his Lawyers not to appear for that days sitting,but it is too late For Him.

Forgery is a Criminal Offence

For the matter pending at the Supreme Court,Paul Emeka still has an option of surrendering and asked the Leadership of Assemblies of God Nigeria for Forgiveness

Promise Uzoma Okoro is a member of Assemblies of God Nigeria