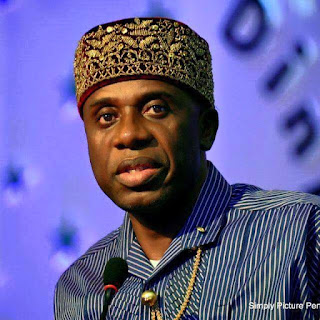 Minister of Transportation, Mr. Rotimi Amaechi, says the Federal Government is working on  the establishment of a national shipping line to ensure the maximum exploitation of the potential of the maritime industry.

The minister said this in a keynote address he delivered at the 14th Maritime Seminar for Judges organised by the Nigerian Shippers’ Council in collaboration with the National Judicial Institute.

This was contained in a statement issued on Tuesday by Amaechi’s media office.

The minister added, “The present administration is looking into ways of encouraging the establishment of a national shipping line to ensure the maximum exploitation of the potential of our maritime sector.

“The Federal Government is doing a lot towards improving the process of doing business in Nigeria, especially in the maritime sector. The Federal Government’s effort towards the facilitation of trade includes the modernisation of transport infrastructure such as the establishment of deep sea ports to attract the patronage of our seaports by modern mega ships and the establishment of dry ports to decongest the seaports and facilitate the expeditious evacuation of cargo from the seaports among others.”

The minister suggested that maritime laws should be made compulsory courses in tertiary institutions.

In his address, the Chief Justice of Nigeria, Justice Mahmud Mohammed, said the seminar had contributed immensely to deepening the synergy between the judiciary and the maritime sector.

He added, “The Nigerian judiciary is ready to deepen this synergy as part of our wider reform efforts that would reposition our judiciary for better justice delivery and retain our place as one of the best judicial institutions in the world.

“In furtherance of its drive to ensure a quick dispensation of justice, the Nigerian judiciary remains similarly committed to the use of a multi-track, multi-modal justice delivery system that includes a more robust adoption of alternative dispute resolutions as a veritable medium of settling disputes.”