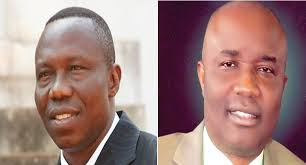 Not Fewer than 300 Worshipers Of Assemblies Of God Church in Bokoshe, Radura in Fan1 section of  Former Jos District, now Gwol Area on Sunday 29th of May 2016 regained their consciousness from the evil Spell of the Ex-Communicated former General Superintendent Rev Dr Paul Emeka.

Assemblies of God Church, Bokoshe, Radura in Fan1 section, before now was a faction that Formerly pledge loyalty to the Suspended,Dismissed and Dis-Fellowshipped Former General Superintendent of Assemblies Of God Nigeria . Rev. Dr. Paul Emeka.

PUO REPORTS exclusively gathered that Rev Dr Paul Emeka had in 2015 when he Visited the Area,told lies that he was Suspended by Assemblies Of God Nigeria Leadership because the Church never wanted anybody that is not an Igbo Man to be its General Superintendent.

Paul Emeka reportedly told the People of Jos District that his Father is From Jos,hence he was their brother and that they need to support and Stand by Him,he showed them the marks on his face to prove that he was from Jos in Plateau State.

But on Sunday 29th of May 2016,the Pastor of the Church,the Church Committee,Members of the Church Board said they have now realized that they were deceived by Paul Emeka

They declared Total Support and Loyalty to the  Leadership of Rev. Chidi Okoroafor and the General Council of Assemblies Of God.

Those who witnessed the reunion service on Sunday May 29th 2016 at Assemblies Of God BOKOSHE in FAN 1 SECTION Gwol Area Were all the members of the Church Committee Members, sectional Pastors, Church boards and not fewer than 300 members that attended Church that Sunday

Gwol Area has Rev David Davou Tang as its Chairman