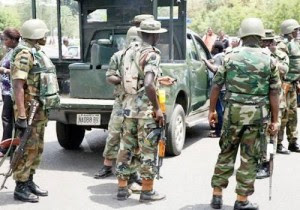 The Gunmen who took the Men of the Joint Military Taskforce by surprise shot at their Hillux Van stationed at the Checkpoint,killing two Soldiers Instantly.

It was gathered that the men of the Task Military Taskforce who force drivers into paying the N100 extortion fee,pack any driver who refuses to make the payment which is usually collected by one of their Team Member Inside their Packed Hillux Van

As a result of the killing of two of its men Yesterday,the Men of the Joint Military Taskforce today forced all passengers to come down from their various Vehicles and raise up their two hands before crossing the Checkpoint

A Driver who spoke to PUO REPORTS on condtition of Anonnymity said the developement has removed the burden of N100 from them because since all Passengers are now coming down from their Cars,they no longer pay the N100 to men of the JTF