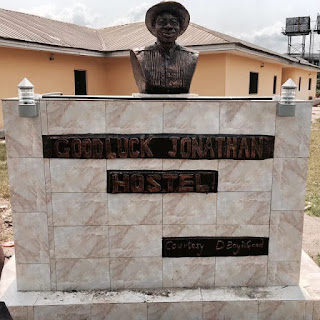 A man has erected the statue of former President Goodluck Jonathan at the University of Port Harcourt (UNIPORT).
Comrade Onyekachi Divine said he embarked on the project to show love for Nigeria’s ex-president for his exemplary display of democratic leadership to Nigerians.
Comarade Divine also said the honour was done to Dr. Jonathan for his contributions to the development of his alma mater (UNIPORT).
He wrote: ”Recognition well-deserved and I chose to do it for the man after my heart.
”This rare statue is for the love I have for him and commissioned to respect our former president in recognition of his exemplary display of democracy, leadership to the country and contributions to the development of his alma mater (UNIPORT).
”He is my hero.The artwork like the man that inspired it, with the signature hat and smiling face all in place.
”He contested and lost the 2015 presidential election, upon which he conceded defeat and became the first sitting Nigerian president to do so.”
Source:sun