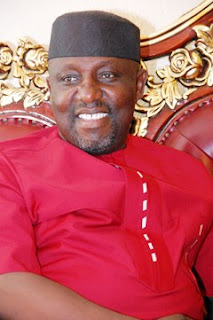 The Anambra State Governor, Chief Willie Obiano on Wednesday described the Imo State Governor Owelle Rochas Okorocha as a shameless son who is spitting on his father’s grave.

He said the Imo governor had moral problem in fighting the All Progressives Grand Alliances that made him governor after several failed attempts in the past to be one.

Obiano said ordinarily he would not have wasted his time in replying Okorocha’s tantrums but for the purpose of guiding the public aright.

The statement read in part, “The attention of the Media Directorate of the Anambra State Governor, Chief Willie Obiano has been drawn to the gratuitous diatribe by a fellow South Eastern Governor, Rochas Okorocha of Imo State against his person and the government of Anambra State.

“It is not in our tradition to respond to such issues but since silence in the face of such grave claims often amounts to guilt, we are therefore duty bound to make our position known to properly guide the public.”

Okorocha had in a statement on Tuesday signed by his Chief Press Secretary, Sam Onwuemeodo described Obiano as “a clueless and aggressive governor who should have done better as a militant than as a governor”.

Replying Obiano wondered what cluelessness meant to Okorocha if his ( Obiano’s) administration which “has dazzled Nigerians with superlative achievements would be referred to as clueless”.

He said, “If a governor that has constructed countless number of roads and bridges, embarked on several rural electrification programmes, constructed uncountable number of schools, and health facilities as well as rid the entire Anambra State of crime and criminalities, is being termed clueless by Okorocha then there must be another meaning for cluelessness.

“Okorocha is widely known for his questionable past which has continued to trail him despite his hogwash attempts to cover it up with a facade of his bogus but empty philanthropic activities. Many people have over time seen through his tricks.

“Indeed Okorocha is an example of what a leader should not be. He talks of ideas when he cannot pay workers salaries and now tries to intimidate Imo retirees to forfeit 60 percent of their arrears of their sweat.

“This is a Governor who has failed woefully to pay workers salaries. He is also heavily indebted to even pensioners who have spent their youth and strength to labour for the state, in their old age.

“As Nigerians ruminate on this matter, the question should be asked: What was Okorocha before he became governor? What was his visible source of income?”