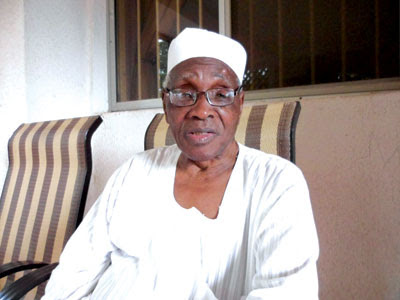 Spokesman of the Northern Elders Forum, a think-tank for the 19 Northern states, Prof. Ango Abdullahi may have unwittingly caused the settled dust of the need for Nigeria’s breakup into smaller units to rise and swirl around.
In an interview with Sunday Sun in his farm in Zaria recently, Ango, a politician, professor of Agronomy, one-time Vice Chancellor of Ahmadu Bello University who attended four constitutional conferences in Nigeria threw a challenge to those who think that the North is afraid of Nigeria’s disintegration into more basic constituents, saying the North was ever ready for the dissolution and that the way to go about it was through the calling of a formal meeting with complete powers to terminate the legal relationships between the constituent parts in Nigeria.
According to him, If we agree that we should live together as a people and as a country, so be it, but if the general consensus is that Nigerians want to go their separate ways either on the basis of ethnicity, culture, history or religion, why not; why not, adding, “if anybody tells you that the large informed opinion in the North is against the dissolution of Nigeria, he is telling you lies.”
Ango holds strong views when it comes to matters of regional combination of parts that works together well, but he says, “the only thing we have not done which I prefer we do is Sovereign National Conference where the decision of the people will determine whether Nigeria stays as a country or people will go in as many separate ways as they choose.” He spoke on other topical issues as well. Happy reading.
The governors of the 19 Northern States held a meeting recently in Kaduna. The key word and part of their concern was the unity of the North. As the spokesman of the Northern Elders Forum, I wonder if your forum is not worried about the disappearance of the once monolithic North. It seems the fabric of the unity of the North has been weakened. Or how do you think?
This should not surprise you if you only go back to history. In 1960, you had three regions in this country. It was in 1963 that the fourth region, the Mid-West region came into existence and each region had a constitution, Eastern region, Western region, Northern region and later Mid-West region constitution. So, we had three regions, virtually autonomous regions in 1960 up to 1963. And if you look at the political set up at that time, what we had was a weak central formation called Central Government with certain responsibilities mainly having to do with Foreign policy, the Armed Forces and so on.
But most of the nitty-gritty in governance was left in the hands of the regions. There was the premier of Western Nigeria, Chief Obafemi Awolowo, the premier of Eastern Nigeria, Dr. Nnamdi Azikiwe and the premier of Northern Nigeria, Sir. Ahmadu Bello. Ahmadu Bello was the leader of the Northern People’s Congress, NPC, but given the importance of making sure that the North was governed properly, he gave up the idea of being the Prime Minister of this country even though he was the leader of the largest political party at the time that was controlling the federal legislature. They decided that Abubakar (Tafawa Balewa) should go to the center, he will remain here in the North. The North under Sardauna was as diverse as it is today, but it is a matter of style of leadership and of course, the constitutional arrangement in existence at that time made the North one, what you described as it appears to be monolithic because to everybody the rallying point was Kaduna.
You used the word it appears and…

Absolutely, absolutely, we are. It all depends on the selfish way people want to negotiate. I am 78 now and I also went to the only university in the country at the time in Ibadan. Nobody can tell me about the history of this country. I know a lot about it because I was very much awake and a grown up person to know what happened. The people who argued for the creation of states in 1966/67 are the same people today who are asking for the restructuring of Nigeria with particular preference for regional arrangements. The South-west wants preferably a region, a region that was at one time under the leadership of Chief Awolowo, unless, of course, you are trying to ignore all the writings, all the things that had been written, particularly in their declaration called DAWN, Development Agenda for Western Nigeria, then you can ignore this. The Biafrans where you belong, for example, are saying the same thing. Chief Ekwueme is my respected leader. He was in the 1995/96 conference. In fact, he led the Igbo socio-cultural group to the conference and their proposal in that conference was for Nigeria to become a confederate unit. And of course, at that time, perhaps, there was still the feeling that some hopes still remain that Nigeria should paddle along and perhaps they will overcome some of these differences. His proposal for confederate arrangement was defeated in the conference. I was there. But when he got the opportunity to review the report of the conference, a committee was set up to look at the report of the conference. He was the one who really worked for these so-called geo-political areas that is totally unconstitutional. They are not part of our constitution and this is one of the mistakes that the country is going through. Geo-political zones are not units in our constitutional arrangements. They are selfish conveniences of people who are perhaps clamouring for political positions, elective or otherwise, that are operating today to the detriment of good governance in this country.
Why is the North ready for dissolution? What are the indices?
The biggest indices other Nigerians do not want Nigeria; so I don’t see why the North should insist on having Nigeria. That is the biggest index I have. And this is on the basis of the recent statements. The Nigerian elite are the ones undermining the existence of the country and as long as they remain in the fore-front as elite and politicians, so long as we are going to have problems, so long will Nigeria not have the rapid development that we had hoped to when we got independence in 1960.
Have we statements that are calling for the dissolution of this country?
No, there are, there are, there are; the Nwabuezes of this world. We sat with him a number of times, we argued, he is vehemently anti-North, anti-Hausa/Fulani. I spoke to him and he cannot deny this.
What I know they have been talking about is restructuring, that the country should be restructured
Which restructuring? What restructuring do you want? Initially, there was a bloc country broken into regions. The regions were broken into states and today, there are 774 local governments, mainly in pursuance of so-called grassroots participation in government. What else is there? The only thing that we have not had…we had constitutional conferences so many of them. We had all these creation of states, which we were not able to do as civilians and we only waited for the military to come and do them and still people are saying that they are not satisfied with the structure as it is in Nigeria.
Are you sure you are speaking the minds of northerners because they will challenge you?
They are welcome. I am waiting for them. I am speaking my mind. I am a northerner and there are so many people who share my views and there are so many people who may not share my views, but I can assure you there are quite a number of people who share these views today. The indicators are very clear. The North appears as if it is the one that should carry the can for Nigeria’s unity and this is not acceptable anymore. If Nigeria is beneficial to all Nigerians, so be it, but Nigeria should not be kept while the North is being blackmailed and that Nigeria unity should be at the expense of the North. So this is not acceptable anymore. So, the North is ready for dissolution, anytime.
If that is the case, how do we go about the dissolution?

Well, we can…the only thing I was going to say and I didn’t say is that we had all the constitutional conferences that we should never have had from colonial to post colonial periods;  constitutional conferences every day, Nigeria is not working, what can we do; we kept doing all these conferences and so on. The only thing we have not done which I prefer we do is Sovereign National Conference where the decision of the people will determine whether Nigeria stays as a country or people will go in as many separate ways as they choose. So there should be no more restructuring in terms of the geography of the country as far as I know that will make any sense, but restructuring politically, socially and so on …we made quite a number of mistakes.

For example I am one of those who don’t believe in presidential system. This is the first mistake Nigeria made, to abandon the parliamentary system of government and adopt this Karakara presidential system of government, which contribution to the Nigerian state is merely corruption, indiscipline and so on. For those of us who lived in the days of parliamentary system, we can say that there is more accountability in the system. You cannot be a minister unless you are elected from your constituency. But now, if you are a bootlicker and praise singer of the president, governor or local government chairman you are given a position.

Full Interview is at the SUN NEWSPAPERS

Taraba govt declares 7 pm to 6 am curfew as election...

Rivers APC Crises: Magnus Abe Has Stabbed Me at the Back,Says...