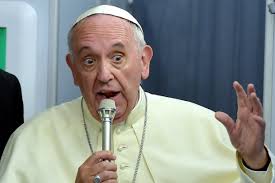 Pope Francis on Sunday urged the faithful to pray for unborn children threatened by “the termination of pregnancy” in a throwaway culture marked by falling birthrates.
“Every life is sacred. Let us promote a culture of life as a response to the logic of throwing away and in the face of demographic decline,” he said in an address to mark the “international day for consecrated life”.
“Let us pray together for children threatened by the termination of pregnancy and also for people at the end of their lives,” he said during his weekly Angelus prayer in Saint Peter’s Square.
Since his election, the pope has expressed concern over the demographic decline in Europe and particularly in Italy, which the Catholic Church believes is fuelled in part by abortion — a practice which Francis, like his predecessors, fiercely opposes.
But last year he granted priests the right to permanently forgive abortion, extending a temporary measure put in place during the Vatican’s jubilee “Year of Mercy” which ended in November.
The Catholic Church considers abortion to be a sin, with the priestly pardon applicable not only to women who have abortions but also to those who carry them out or are involved in any way.
Source :BNN