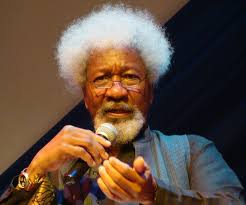 Nobel laureate, Wole Soyinka, has berated the Nigerian police for seeking to stop the protest planned by a musician, 2face Idibia, against Federal Government alleged non-performance.

He described the police action as undemocratic.
Though 2face has backed down on the protest scheduled for Monday (today) in Lagos citing security concern as reason, the National Association of Nigerian Students, the Enough is Enough group and a popular comedian, Olaseyitan Lawrence, popularly known as Seyilaw, have said in spite of the musician’s action, the protest would not be called off.
Soyinka’s position was contained in an article he sent to an online medium, SaharaReporters, on Sunday.
The Nobel laureate, who said he had sent a message to the Inspector-General of Police, through the Lagos State Commissioner of Police, Fatai Owoseni, declared that  he was shocked to learn from media reports that the office of the IG could issue a statement stopping the protest.
He described the action as “a huge disappointment, a disservice to the cause of democracy, tolerance of dissent, and principle of inclusive governance.”
Soyinka said, “The police attempt to reverse the hands of the democratic clock is even more appalling at a time when open demonstrations are taking place all over the world against the policies of a recently elected President of the United States, (Donald Trump), whose democratic formula allegedly serves as Nigeria’s adopted model. Across numerous states of that federated nation, ongoing at this very moment, is the public expression of rejection of a President’s policy that has also pitted the executive against the judiciary. We have heard of no preventive action by the police, or arrests of demonstrators.
“Again and again, efforts, both under military and civilian orders have been made to stifle the rights to freedom of expression by Nigerian governments – Buhari, Babangida, Obasanjo, Abacha, Jonathan….and now again, Buhari? These efforts have been, and will always be resisted. It is a moral issue, as old as settled humanity. It has been settled in other parts of the world. Nigeria cannot be an exception, not as long as her citizens refuse to accept the designation of second, even third-rate citizens.”
Soyinka urged the police to respect the constitutional rights of Nigerians.
He said, “I hope that, even at this eleventh hour, legality and the democratic imperative will prevail. Finally, I shall be less than honest if I do not add the following, mostly directed as a warning to the very polity on whose behalf the democratic war is joined, again and again:
“Minus a minuscule but highly voluble minority, mostly of pitiably retarded polluters of the common zones of public interventions, I do not know of any citizens of civilised community who do not subscribe to the fundamental Right of the Freedom of Expression in any form, as long as it is peaceful, and non-injurious to humanity. I would hate to conclude that the security agencies, or the government they serve, at this stage of national development and recent history, would choose to align themselves with such an unteachable minority.”
Meanwhile, Seyilaw has expressed his disappointment at 2face’s decision to opt out of the planned rally.
Seyilaw said though he understood 2face’s concern, he was not deterred and “God knows I will still be at the stadium tomorrow whether people gather there or not.
“I have a right to be at the stadium too,” Seyilaw wrote on his Instagram page on Sunday.
Also, the Enough is Enough group, in a statement on Sunday by its Executive Director, Yemi Adamolekun, insisted that it would participate in the protest, which is scheduled to hold in Lagos and Abuja, even though 2face, who invited the group to join the protest, had on Saturday night said he was backing out based on security concerns.
Adamolekun said, “2face Idibia (2Baba) informed us late last night that ongoing conversations with security agencies have not allayed his security concerns and so he had decided not to participate in a physical protest. We thanked him for inviting us when he first decided on this protest, and informed him that we believe it is important, despite the risks, to continue with the demands, for the sake of Nigerians who have put their trust in this movement.”
Also, the Deputy Coordinator of NANS in the South-West, Mr. Saheed Afolabi, who spoke with one of our correspondents on the telephone on Sunday, said it was good that 2face came up with the idea but his withdrawal from it would not stop those, who had indicated their interest to participate from going ahead with the protest.
However, the Chairman of the Civil Societies Coalition for Emancipation of Osun State, Mr. Suleiman Adeniyi, said his group would make its intention on the planned known later.
Source: punch

Barring me from talking against my fundamental human rights –...