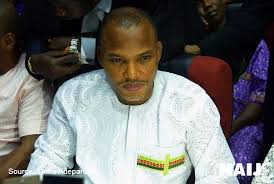 The Indigenous people of Biafra (IPOB) has registered its disappointment with the Economic Community of West African States (ECOWAS) court of justice and the Federal High Court in Abuja over the adjournments of cases of its leader Nnamdi Kanu.
The IPOB said the adjournments by the courts is a collaboration to scuttle justice on the ongoing trial of Kanu.
The IPOB in a statement signed by Powerful Emma, its spokesperson said the action of the two courts is unhealthy and dangerous judicial partnership against Kanu.
The group said: “The ECOWAS Court and Nigerian domestic courts have been noticeable recently on the way both courts have resorted to making a complete mockery of justice by systematically extending the dates of their respective rulings on the cases before them involving our supreme leader Mazi Nnamdi Kanu versus federal government of Nigeria. From a viewpoint of fairness and justice, these undue delays are appalling.”
The group accused African judges of lacking the ability to stand up for the rights of oppressed individuals.
“It is not healthy for society or the interest of democracy for judges to base their handling of court cases on protecting the interest of who pays their salary.
If this ugly, nonjudicial and illegal trend in not checked in black Africa, there is no hope for democratic development and defence of the rule of law. We can understand, if not condone, Buhari’s crude interference in the judicial process because he is by nature a dictator, what is baffling is that justices of the law both in ECOWAS Court and Federal High Court Abuja should aid and abate him in the abuse of human rights and delay of the course of justice,” The IPOB said.
‘The determination of the case of gross abuse of human rights instituted by Mazi Nnamdi Kanu against the regime of Muhammadu Buhari has been pending before ECOWAS Court since March 2016. Any reasonable person is bound to ask why it has taken such a long time to deliver judgement on a clear cut case of disobedience to court order which everybody is already aware of,” Emma said in the statement.
Emma noted that since the inception of the two cases, there has been ‘judicial caricature’ in both courts of ECOWAS and Federal High Court Abuja under Justice Binta Nyako and John Tsoho before her.
The group accused the judges of being afraid of losing there jobs as justices of the Federal High Court.
“It is very sad that black Africans have through this case, involving Nnamdi Kanu, proven that they are still, even in the 21st Century, incapable of human civilisation. This same partial and compromised approach to adjudication was what led CAF to bring in foreign referees to officiate football matches in Africa.
More so, we all are aware that Justice Binta Nyako as a Fulani relative of Major-General Muhammadu Buhai is actively assisting the Fulani run DSS in looking for any incriminating evidence with which they can hinge the justification of the illegal detention of Mazi Nnamdi Kanu. Binta Nyako and ECOWAS Court must know that their primary concern should be the unbiased interpretation of the law and not to stifle legitimate Biafra agitations. Neither should Binta Nyako use Nnamdi Kanu to get her family to escape EFCC investigations into corruption, bribery and money laundering allegations against her husband and first son.
Again, we observe that both ECOWAS Court and Nigeria Federal High Court Abuja have ran out of conscience and ideas on how to handle this case.
They must therefore tell the whole world why they are still delaying this matter in their respective courts.
The IPOB further called on the international community to prevail on the attorney general of the federation of Nigeria and the National Judicial Commission to release its leader Mazi Nnamdi Kanu and others detained illegally across Nigeria.
“ECOWAS court which earlier fixed its date for ruling on the case of gross human rights violation instituted by Mazi Nnamdi Kanu has been moved to March 7 2017 from the scheduled date of February 9, 2017 with no justifiable reason. ECOWAS Court even crassly maintained that the new date may still be extended if the need arises.” IPOB said.
“What this shows is that Nigerian domestic courts is now working hand-in-hand with ECOWAS court to keep delaying this matter. Binta Nyako is should be noted also moved her own date for ruling from February 10, 2017 to March 1, 2017 without reason also.
“There is a saying that justice delayed is always justice denied. We have no confidence in compromised poor African judges who demonstrably do not know the law or are too terrified to apply it.
“Their primary preoccupation as judges should not be to secure their own personal financial well-being by doing what the Nigeria Government, who admittedly is the principal financier of ECOWAS Court, tells them to do, but rather the unbiased dispensation of justice.
“We emphasize our call on the civilized world, men and women of good conscience, World Christian societies, international observers, Human Rights organisations, Amnesty International, Human Rights Watch and other interested parties to prevail upon the Nigeria Government to release our leader Mazi Nnamdi Kanu and other members of IPOB detained in all the Nigeria prisons and DSS cells across the country because courts in Africa are too corrupt and infinitely incapable of delivering fair judgement in any case involving a Biafran,” the group said.
The Federal High Court on Friday, February 10, adjourned ruling on an application made by Kanu and other defendants to squash charges against them.
While the court gave no reason for its decision the ruling was rescheduled to take place on Wednesday, March 1.
Similarly, the ECOWAS Court of Justice had earlier adjourned ruling on an application made by Kanu on the infringement of his fundamental human rights by the Nigerian government and its security agencies.
The regional court in its case also adjourned ruling on the matter to March 11.
Source :Sun

NDLEA arrests woman who faked pregnancy with wraps of cocaine