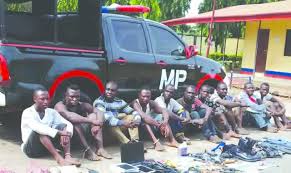 Niger State Police Command has said that it arrested 194 suspects and recovered over 48 dangerous weapons from criminals in parts of the state.

The state Commissioner of Police, Zubairu Muazu, told Northern City News in Minna, that the suspects were arrested within one month.
Muazu said the aerial surveillance and ground raids carried out by his command to end the incessant attacks in some communities of the state culminated in the arrests and recovery of assorted weapons.
Giving the breakdown of the weapons recovered, the CP said his men recovered five AK47 rifles with 648 rounds of live ammunition, 21 single barrel guns with 249 cartridges, one revolver rifle and five revolver short guns.
Others are six ‘Ghanaian” pistols, one locally-made pistol, nine dane guns, axe, knife, bow and arrows.
He said, “The police in collaboration with other sister security agencies took the battle to the dens of armed bandits in Alawa, Kukori, Pandogari, Lau’ kaffin koro, Sarkin Pawa’ Shiroro, Mangoro, Lapai and Gurara.
“A total of 194 suspects were arrested including 24 most wanted kidnappers and cattle rustlers.”
He said that 612 stolen cattle were recovered and handed over to the owners.
The police had earlier deployed operatives to stem violent attacks in some villages in Rafi, Shiroro, Munya, Lapai and Paikoro local government areas.
Source :punch

I joined APC to actualise my Senatorial ambition – Ekwunife