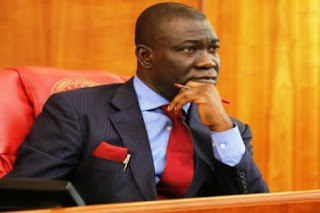 Ekweremadu, who spoke at the 46th convocation of Bigard Memorial Seminary, Enugu, said the call became imperative because government had failed in building upon the successes recorded before the forceful takeover of the schools.
He also raised alarm over what he described as discriminatory practices in the admission of prospective students into public educational institutions.
Speaking yesterday in Enugu at the 46th Convocation of the Bigard Memorial Seminary, Senator Ekweremadu however drew the nation’s attention to how quality education had raised South Korea from the ruins of war and poverty at the end of the Korean War in 1953, to a global economic super-power, even with virtually no mineral resources.

The Deputy Senate President wondered which nation ever made progress by “admission policies and practices that lower the standard to accommodate some candidates at the expense of brighter students and merit, as is the case in Unity Schools, rather than ensure that every state raises the bar in terms of teaching and funding to enable their students match their peers from other parts of the country”.
According to him, the forced takeover of schools in the 1970s “should never have happened”, noting that such “punitive act, coupled with long years of military misrule threw the door of our educational system open to the evils of decadence, nepotism, poor funding, decrepit infrastructure, abandonment, mediocrity, immorality and indiscipline that ravaged other government-run institutions and services”.
Ekweremadu noted that the Church and other religious institutions, when they held sway, lifted the education sector to lofty academic, disciplinary, and moral standards. However urged the government to “give to the Church what belongs to the Church”.
He observed that the handover of schools by Anamabra State to their original owners, saw the State rise from previous 25th and 26th positions on a table of 36 States, to first position in National Examination Council (NECO) performance in 2011 and 2013.
Ekweremadu, was, however, quick to add that such handover should not serve as a ploy by States to evade the responsibility of funding quality education for their citizens as “quality education costs good money”.
The deputy Senate President who noted that the Government of Anambra State under former Governor Peter Obi not only handed over 1,040 primary schools to the Church in 2011, but also voted N6 billion for the schools, knowing that it would still be serving the same Anambra people, said, “Anamabra only saw it as a way to ensure that they are better managed for the academic and moral excellence of the students”.
He further called for the restructuring of the policy and regulatory frameworks to remove impediments to public-private partnership in the education sector, while also urging the Church and religious organisations to address the concerns, such as high cost of Church-run educational institutions, raised by stakeholders.
“Like in the days of old, the Church should not see her role in education from the point of business in the real sense of it”, he admonished.
On his part, the Bishop, Catholic Diocese of Sokoto, Matthew Hassan Kukah, regretted that the country was yet to truly takeoff, even more than 50 years after independence.
He said Nigeria’s masses had shown uncommon commitment to the nation’s democracy through continued sacrifice and endurance, noting that the challenge was whether the political elite had the reflex, capacity, and commitment to lead on the path of democracy.