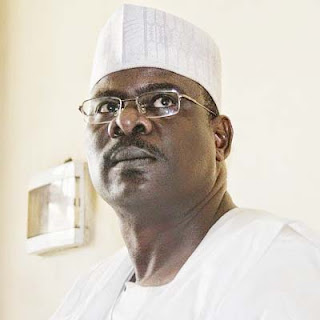 Fresh crisis may hit the Senate over moves to sanction immediate-past Senate Leader, Ali Ndume, for what lawmakers described as “unparliamentary” utterances.

This is coming at a time senators have resolved to investigate Senate President, Bukola Saraki over alleged importation of bulletproof Sport Utility Vehicle (SUV) impounded by the Customs and Senator Dino Melaye over alleged certificate forgery.
Daily Sun gathered that plans had reached advanced stage to move against Ndume, who, of late, has been making comments against positions taken by the Senate on issues.It is believed that senators against Ndume are reaching out to others,  with Senator  Melaye as the arrowhead.Ndume incurred the wrath of some senators when he protested the rejection of the acting chairman of the Economic and Financial Crimes Commission (EFCC), Mr. Ibrahim Magu, by the Senate.
Ndume, protested the approach adopted by the Senate, said Saraki erred by accepting a report not signed by the Director-General of Department of State Services (DSS), Lawal Daura.Referring to a similar letter written to the Senate President by an Assistant Comptroller General of Nigerian Customs Service (NCS), on behalf of the Col. Hameed Ali, Ndume queried why Saraki declined to read the letter, but accepted a similar one from the DSS.
The former senate leader, after the second rejection of Magu, granted several press interviews where he openly criticised Saraki and the entire Senate for rejecting the acting EFCC chairman.
Unperturbed by moves against him, Ndume, yesterday, called for the investigation of Saraki over the face-off with the Comptroller General of Customs. He also want Melaye investigated over alleged certificate forgery.
Senator Ndume, who came under a motion of national importance, said Saraki, according to a story published by an online newspaper, sanctioned the summon of the Customs over claims that his bulletproof Ranger Rover Sport was impounded.On the part of Melaye, Ndume said an online platform published a story that he did not obtain a degree in Geography from the Ahmadu Bello University, Zaria.
Drawing instances from four scenarios, Ndume said a former Speaker of the House of Representatives, Salisu Buhari, was accused of certificate forgery and eventually cleared his name.He said former Senate President, Adolphus Wabara, was also accused when he held sway as Senate boss, was investigated, just as current Governor of Katsina State, Aminu Bello Masari, as Speaker of the House of Representatives, when he was accused of certificate forgery.
He said Dimeji Bankole, a former Speaker of the House of Representatives, was accused of not writing his Senior Secondary School Examination and was investigated, insisting that Saraki and Melaye should be investigated over the allegations.
Ndume said: “This matter borders on our privileges. One has to do with Senator Bukola Saraki, the Senate  President, and it was reported in a paper I have it here. The newspaper said the Senate is on vengeance after Nigeria Customs, seized Senator Saraki’s bulletproof Range Rover over fake documents.“My colleagues that are following events, particularly online, have seen or heard or read the rein of abuses on this Senate and the misconception of the fact that we invited the Customs boss based on a very unpopular policy that affects the people we represent, but now we  are faced with this,” Ndume said, citing former National Assembly leaders that had been investigated in the past.
According to an online newspaper, the Senate’s current war against the Customs boss, has its roots in the fact that Customs officials seized a bulletproof Range Rover Sports Utility Vehicle (SUV) allegedly belonging to Senate President, Saraki.
The newspaper claimed that Nigeria Customs officers in Lagos had, on January 11, 2017, intercepted and impounded a Range Rover SUV, which carried documents that claimed its chassis number was “SALGV3TF3EA190243.” Customs officers, according to the report, said the value of the car was N298 million, which meant that Customs duty of N74 million should have been paid on the car.
But Special Adviser to Senate President on Media and Publicity, Yusuph Olaniyonu, has stated that  the allegation raised by Senator Ndume, linking  Saraki to the importation of vehicle lacked basis, as it was outright falsehood.In a press statement, Olaniyonu said from the facts and documents about the seized vehicle, it is obvious that the Senate president has nothing to do with the importation of any vehicle.
Said he: “A supplier was engaged by the Senate to supply a vehicle. While transferring the vehicle between Lagos and Abuja, it was impounded by the Customs. We believe that is an issue between the supplier and the Customs because the Senate has not taken delivery. So, why is somebody trying to drag in the name of Saraki into the issue.
“The documents on the vehicle are there for the general public to view and make their conclusions. Now, that the matter has been referred to the Committee on Ethics, Privileges and Public Petitions, all the facts will be out.”
Last weekend, Melaye alleged, in a Facebook post, that the EFCC was plotting to cook up something against him. A day after, news emerged that he did not graduate from the Ahmadu Bello University, Zaria.
An online newspaper, which published the report, claimed that Melaye did not graduate from the Department of Geography, Ahmadu Bello University, where he reportedly had his first degree.
Senator Melaye, in a press conference, after plenary, told journalists that he will submit himself to the ethics committee for proper investigation. He, however, claimed that the outcome of the investigation will exonerate him.“I have nothing to hide. I have seven degrees and I am currently running another programme. I have my certificates and I will make everything available to the committee during the investigation,” Melaye told newsmen.
With the nod of the Deputy Senate President, Ike Ekweremadu, who presided over the yesterday’s legislative business, Ndume submitted some newspaper publications, after which the matter was referred to Senator Samuel Anyanwu-led Senate Committee on Ethics, Privileges and Public Petitions for further investigation.