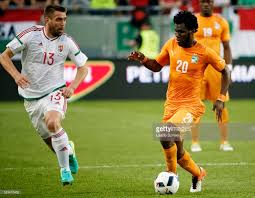 England-based pair Jonathan Kodjia of Aston Villa and Crystal Palace’s Wilfried Zaha fired Ivory Coast to a 2-0 win over Russia in a friendly at Krasnodar on Friday.

It was Russia’s third defeat in six matches since Stanislav Cherchesov took over as manager in August — the other two coming against Costa Rica and Qatar last year.

French-born forward Kodjia put the visitors 1-0 up just before the half-hour mark after latching onto a pass from inside the Ivory Coast half and driving into the Russian box before firing home from an angle despite pressure from Spartak Moscow defender Ilya Kutepov.

Russia poured forward after the break looking for an equaliser but poor finishing left the boisterous capacity 34,000 crowd in Krasnodar frustrated.

Zaha sealed the win with 20 minutes to go after picking up the ball just outside the area and dribbling past four players before hammering home a shot from the edge of the six-yard box just under the crossbar.

Cherchesov, who was appointed after the country’s disastrous Euro 2016 campaign, faces the daunting task of trying to rejuvenate the team ahead of next year’s World Cup on home turf — he has set his players the goal of reaching the semi-finals.

He rang the changes with Friday’s team including only CSKA Moscow goalkeeper Igor Akinfeev and Spartak winger Alexander Samedov from the team that represented Russia at Euro 2016 last June in France.

Ramsey Ogagaoghene and how not to be Desperate