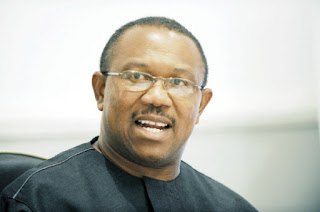 Former governor of Anambra State, Peter Obi, has called for the release of the leader of the Indigenous People of Biafra (IPOB), Nnamdi Kanu and other detained Biafra activists.

Obi, while fielding questions from newsmen in Enugu, yesterday, emphasised that use of force is not the solution to Biafra agitation and, as such, agitations are best resolved through dialogue.
“I wish to appeal to the Federal Government to change its hardline posture on this issue and yield to the persistent clamour for the release of Kanu and other Biafran activists, to douse the tension in the country, especially in the South-East and South-South geo-political zones.
“The Federal Government should engage them in dialogue. Every agitation in the world is resolved through dialogue and not by means of force.”
The former governor recalled that he was among the first to advocate a political solution to the renewed Biafra agitation and expressed disappointment that the advice was yet to be heeded.
“This has been my consistent position and I remember making the same point when I spoke at an event organised in Enugu in February 2016 by Igbo Youth Movement,” he said.
He noted that while the federal government might have reservations about the Biafra agitation, it should realise and acknowledge that the agitators, like other citizens, have their fundamental rights of freedom of expression and assembly guaranteed by the Nigerian constitution.
“To the best of my knowledge, the agitation for Biafra is not violent and does not violate either the Nigerian constitution or international laws.
“I, therefore, condemn the use of force against the agitators,” he said.
Obi noted that Kanu and others have been granted bails in the past by courts of competent jurisdiction.
“He said it was a matter of regret that the federal government failed to use those judicial windows to free the detainees.
“The fact that they had been granted bails that were not obeyed makes it even more pertinent to set them free now.
“We are in a democratic regime and it is important that the rule of law should be obeyed no matter whose case is involved.”
The former governor advocated the restructuring of Nigeria, saying it remains the only panacea to various agitations and deep-seated anger that have consistently stoked tension and prevented Nigeria from moving forward.
Source:sun

Hundreds of Rivers Women Clash with Police in Portharcourt