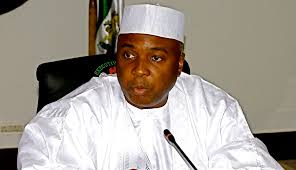 Senate President Bukola Saraki has appeared before the Senate Committee on Ethics, Privileges and Public Petitions to defend himself on his alleged ownership of an SUV seized by the Customs.

He added, “As the President of the 8th Senate and Senator from Kwara Central, I am proud of the Senate as an institution and its Constitutional role to represent the interests of the Nigerian people.

“Further, I am proud to honour the Senate Rule Book that guides our conduct and activities, which is why today I am presenting myself to the Committee today.

“I am here in person because I believe that what you are doing will help strengthen this institution.

“The institution must continue to be strengthened to carry out its mandate, rather than strengthening individuals.

Speaking on the Customs Import Duty policy, he said, “We raised the issue on the Customs policy based on the interest if Nigerians. But those who want to fight the Senate for raising the issue of retroactive duty. Urge committee to protect the institution of the Senate so that it is not ridiculed.”

Can this convention cure ailing PDP?