Home FEATURED Trump Believes Putin On Russia Meddling, But Then Backs US Agencies 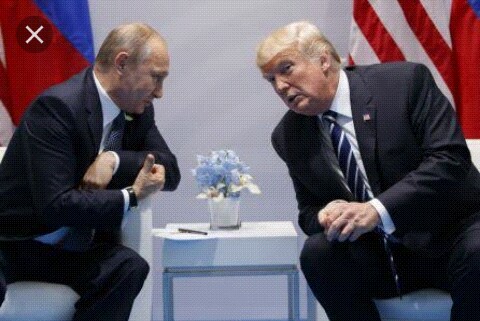 Donald Trump said on Saturday he believes Vladmir Putin’s denials of Russian involvement in the manipulation of the 2016 presidential election.

However, he appeared to contradict himself on Sunday when he said he was “with our agencies” on the question of Russian interference.

Speaking at a news conference in Hanoi on Sunday, he was asked about his comments that he believed Putin’s reassurances given by the Russian president on the sidelines of Saturday’s Asia-Pacific Economic Cooperation (Apec) summit in Vietnam.

“As to whether I believe it or not, I’m with our agencies, especially as currently constituted,” Trump told a news conference in Vietnam. “As currently led, by fine people, I believe very much in our intelligence agencies.”

The president’s comments were criticised by senator John McCain who said in a tweet that there was “nothing America First about taking the word of KGB colonel [Putin]” over the US intelligence community.

Trump was also quickly countered by his own CIA chief, Mike Pompeo. A statement issued by the agency said: “The director stands by and has always stood by the January 2017 intelligence community assessmententitled: Assessing Russian Activities and Intentions in Recent US Elections. The intelligence assessment with regard to Russian election meddling has not changed.”

On Saturday Trump also launched a tirade against special counsel Robert Mueller’s investigation into possible collusion between his campaign and the Kremlin.

The investigation could cost “millions and millions of lives”, Trump claimed, by hindering agreement with Moscow over conflicts in Syria and Ukraine and a looming confrontation with North Korea.

The president’s remarks, made to reporters as Air Force One flew to Hanoi from Da Nang, represented his open disregard for the views of US intelligence agencies which have concluded that Russia did interfere in multiple ways in the 2016 election, with the aim of helping Trump’s candidacy.

Despite his qualifying remarks on Sunday, he suggested he put more faith in Putin’s word.

“Every time he sees me he says ‘I didn’t do that’ and I really believe that when he tells me that,” Trump said on Saturday. “He really seems to be insulted by it and he says he didn’t do it. He is very, very strong in the fact that he didn’t do it. You have President Putin very strongly, vehemently says he has nothing to do with that.”

The president described the investigation led by Mueller, a former FBI director appointed by Trump’s own justice department, as “Democrat-inspired” and a “hit job”.

Trump also claimed the investigation was preventing a normalisation of relations with Putin and therefore could cost countless lives around the world. He suggested Russia was not helping more to persuade Pyongyang to disarm “because of the lack of the relationship that we have with Russia, because of this artificial thing that’s happening with this Democratic-inspired thing”.

“I think [Putin] is very insulted by it, which is not a good thing for our country. Because again, if we had a relationship with Russia, North Korea which is our single biggest problem right now, it would help a lot,” he said.

Having a good relationship with Russia is a great, great thing. And this artificial Democratic hit job gets in the way

“You know you are talking about millions and millions of lives,” Trump said.

“When we can save many, many, many lives by making a deal with Russia having to do with Syria, and then ultimately getting Syria solved, and getting Ukraine solved, and doing other things, having a good relationship with Russia is a great, great thing. And this artificial Democratic hit job gets in the way. It gets in the way. And that’s a shame. Because people will die because of it, and it’s a pure hit job, and it’s artificially induced and that’s shame.”

John McCain, the Republican chairman of the Senate armed services committee responded angrily. Accusing the president of “taking the word of a KGB colonel over that of the American intelligence community”, the Arizonan added: “Vladimir Putin does not have America’s interests at heart.

“To believe otherwise is not only naive but also places our national security at risk.”

Trump met Putin briefly on three occasions at Da Nang. The two exchanged a jovial handshake at the gala dinner on Friday and stood next to one another in a “family photo” of leaders on Saturday. The US press pool including photographers were blocked from covering the day’s events, including the Trump-Putin meetings. Only Fox News and the official White House photographer were granted access.

Putin dismissed accusations Moscow meddled in the US election. “Everything about the so-called Russian dossier in the US is a manifestation of continuing domestic political struggle,” he said.

Putin was asked if he had followed the mounting investigation into alleged contacts between Trump’s campaign team and Russians, including a woman who claimed to be Putin’s niece.

“Regarding some sort of connections of my relatives with members of the administration or some officials,” he said, “I only found out about that yesterday from [his spokesman Dmitry] Peskov.”

He also said: “I don’t know anything about [the investigation]. I think these are some sort of fantasies.”

The two leaders produced a joint statement on Syria, restating their determination to defeat Islamic Stateand their desire for a United Nations-brokered solution.

“It’s going to save tremendous numbers of lives and we did it very quickly, we agreed very quickly,” Trump said.

The statement lists longstanding areas of agreement between the US and Russia on the importance of reviving mostly dormant UN-mediated negotiations known as the Geneva process, which envisages constitutional reform and free elections. In the past, Washington has disagreed with Moscow on how the process should be carried out and what role Syrian leader Bashar al-Assad would play.

Assad’s forces, with Russian and Iranian support, have been gaining ground. The Syrian president has consequently shown little real interest in a peace deal. Asked if Russia would be able to bring Assad to the table, a state department official, quoted on CNN, said: “We’re going to be testing that, we’re going to find out.”

Trump renewed his assault on the Mueller investigation at a time when it is making significant advances, each time a step closer to the president. His former campaign manager, Paul Manafort, and a senior fundraiser have been indicted for money laundering and conspiring to defraud the authorities.