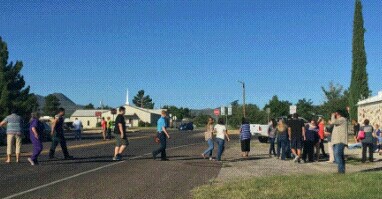 At least 10 people have been killed and 10 others injured after a student opened fire at a Texas high school.

The attacker, who was arrested and charged with murder, was identified as Dimitrios Pagourtzis, a 17-year-old pupil at Santa Fe High School, the BBC reports.

He allegedly used a shotgun and a revolver taken from his father, who legally owned the weapons.

Most of the dead are students, police said.

Texas Governor, Greg Abbott, said “various kinds of explosive devices” had been found at the school, 40 miles (65km) south of Houston, and off-campus. They included “a CO2 device” and “a Molotov cocktail.”

Mr. Abbott said police found information on the suspect’s diary, computer, and mobile phone suggesting that he planned the attack and intended to kill himself afterwards.

The governor said the teenager “gave himself up” because “he didn’t have the courage to commit the suicide.”

PDP’s Victory In Edo Is Sure Says National Campaign Council