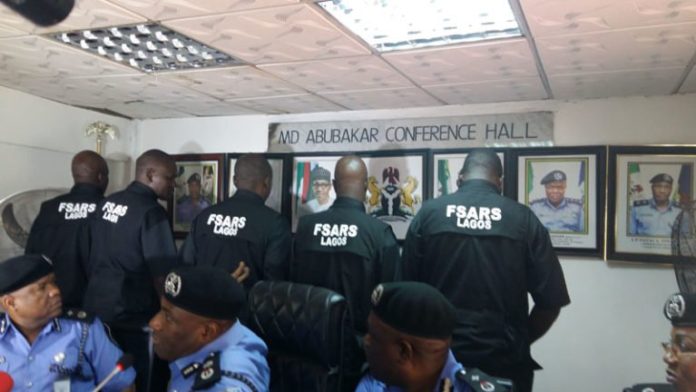 Nigerians have commended the police for arresting one of their personnel who was accused of extorting a lady in the Ikorodu area of Lagos State.

The suspect, Inspector Charles Omotosho, who is an operative of the Federal Special Anti-Robbery Squad (SARS), was said to have forcefully collected N5,000 from the victimThe lady had taken to Twitter to condemn the development, an act which prompted the Police Public Complaint Rapid Response Unit (PCRRU) to investigate the incident.

In a news bulletin on Friday through an Assistant Commissioner of Police, Mr Abayomi Shogunle, the PCRRU disclosed that Omotosho was consequently removed from front-line police duties and taken into custody.

It added that a copy of the officer’s statement of bank account was obtained and the entry of the said transfer was discovered therein in the course of a preliminary investigation.

While some Nigerians have lauded the police for the action taken against the suspect, other narrated their ordeal allegedly in the hands of SARS operatives.
A screenshot of the complaint as received by the Police PCRRU via Twitter
See twitter reactions below;

@ife_luv12 boo you have gotten justice..

The officers handling my own extortion case said i must travel from Lagos to Asaba to proof the case.

Government should just ban SARS. The harrassment, torture & extortion by SARS personnel is happening every where, every minute! The operatives are irredeemable! #ScrapSARSnow

Lol @ife_luv12 this guy will forever regret extorting 💰 from you.. e go dey shout princess for inside cell 😂

This seems to be a good news! More is required from the authority to curb SARS evil acts

Plenty of them maybe this one is not delivering

Yaay!!!!! Now we are talking. Teal crimes close to home being solved. This time, it’s the police, next it will be elected officials

Thank God they are been apprehended one by other. Two of my staff I called this afternoon when I didn’t see them at work share their experience with me as they received my calls from SARS detention at Oshodi, asking them for money but one of them called someone that knows who.