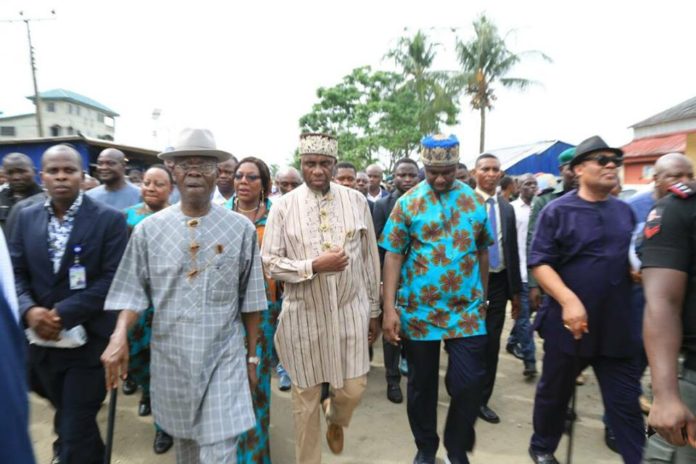 Fresh controversy has engulfed the rescheduled ward and local government congresses of the All Progressives Congress (APC).

The national working committee in a statement by the party chairman, John Odigie-Oyegun, and legal adviser, Muiz Banire, announced new dates for the cancelled congresses.

However, sources within the party and a document obtained from the party secretariat Saturday morning raised concerns over authenticity of that decision.

A senior official of the party said the decision to cancel the congresses was not taken collectively by the National Working Committee, NWC.

The official, who spoke on the condition of anonymity for fear of reprisal, alleged that the memo announcing cancellation of the congresses “was smuggled for the party leaders to append.”

He mentioned transportation minister, Rotimi Amaechi as the “man Friday for both the chairman and the secretary” in the scandal.

The party in the state was enmeshed in crises in the past weeks arising from the congress, leading to violence at polling centres and a court that was to hear the matter.

The party official said there was no reason to cancel the congresses “and no consultation was held before the two party leaders took the decision.”

“The document was brought in for them to simply sign. Their justification is that the minister is their strong backer in their bid to maintain their seats,” he said.

Mr Odigie-Oyegun seeks to retain his seat as APC national chairman, but faces a major opponent in ex-Edo governor, Adams Oshiomhole. The latter has the backing of President Muhammadu Buhari and another leader, Bola Tinubu.

However, Mr Amaechi is believed to be one of the main backers of Mr Odigie-Oyegun.

An examination of the official document announcing the new arrangement for Rivers shows that names of both the chairman and the party’s secretary were not written correctly.

Mr Odigie-Oyegun’s hyphenated surname, Odigie, which comes in official communications, was omitted and the chairman had to correct it with a pen while signing the document.

That of the national secretary was, however, completely distorted as it is written as “Mai Bala Bunu” instead of “Mai Mala Buni”, as the name is officially written.

Repeated calls to both Messrs Odigie-Oyegun and Buni by a PREMIUM TIMES reporter on Saturday were not answered.

Mr Amaechi did not also answer phone calls put through his known telephone line. PREMIUM TIMES was also unable to reach Mr Amaechi’s media aide, David Iyofor, despite repeated calls Saturday afternoon. He also did not respond to a text message sent to him.

Rivers APC chairman, Davies Ikanya, told the News Agency of Nigeria on Saturday in Port Harcourt that the party had deployed officials to conduct the rescheduled congresses.

Mr Ikanya explained that the action was sequel to the directive of the national headquarters.

He confirmed that the party secretariat was opened on May 18 to issue forms to intending contestants on presentation of bank tellers.

“After the APC national secretariat announced the cancellation of the ward and local government congresses conducted on May 5 and 12, respectively, we immediately started the process as directed by the APC.

“We opened the secretariat and started issuing forms to intending contestants as directed by party secretariat for the rescheduled ward congress,’’ the state chairman said.

According to Mr Ikanya, legal issues on the stoppage of congresses in Rivers are within the power of the APC national secretariat to address.

“I am not a lawyer to talk about court injunction but it is within the party’s national secretariat to handle.

“It is APC national secretariat that cancelled and rescheduled the ward and local government congresses, so, ours is to implement the directive,” he explained.

But Peter Odike, the state APC Deputy Chairman and supporter of a senator, Magnus Abe, in a statement said that a court order stopping congresses in the state was still subsisting.

Mr Abe and Mr Amaechi both seek to control the structure of the APC in the state.

Mr Odike urged his supporters to stay away from the congress.

The ward congress eventually held on Saturday in some local governments in Rivers.