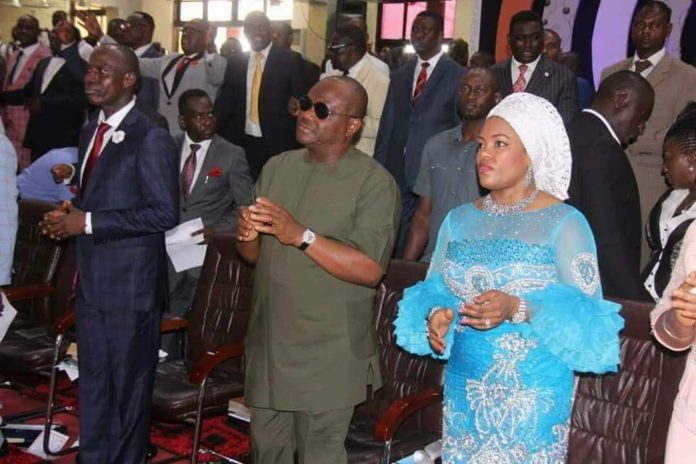 Rivers State Governor, Nyesom Ezenwo Wike has alerted Nigerians that the APC Federal Government is plotting to assassinate him in a crowd and claim accidental discharge.

The governor made the revelation during the third year anniversary thanksgiving service of the Wike administration at Living Faith Church in D-Line, Port Harcourt on Sunday.

He said: “Intelligence report available to us as at this morning indicate that they are plotting to assassinate me in a crowd and claim it was accidental discharge “.

The governor said that the plots of the APC Federal Government and her associates will not intimidate him as he remains committed to the defence of democracy and Rivers State.

He said that the plot will fail, because God will continue to defend him.

He said: “The level of conspiracy against Rivers State is unfortunate. Instead of focusing on governance, they focus on how to assassinate me or frame me up”.

Governor Wike informed the church, that the APC Federal Government through the Inspector General of Police plotted to plant millions of dollars and AK 47 at his Abuja residence, when the Police sought search warrant from an Abuja court.

He noted that last week the Court ruled that the Police can search his Abuja residence, stopping them from their evil plot.

“I am not afraid of my residence being searched by the Police, but I know their evil intention”, he said.

Governor Wike said that the State Government has come to thank God for his protection in the face of continuous plot by agents of the APC Federal Government.

He said thanksgiving enhances God’s protection and financial multiplication. The cleric noted that as a result of the dedication service, God will bless Rivers State.