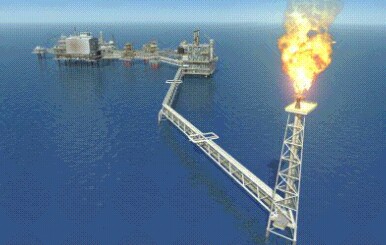 OIL’S contribution to Nigeria’s Gross Domestic Product (GDP) remains below 10 per cent in Q1 figures released yesterday by the National Bureau of Statistics(NBS) in Abuja.

According to the NBS, the nation’s GDP grew by 1.95 per cent year-on-year- in real terms in the first quarter of 2018.

Although the nation recorded some growth in the oil sector during the period, the contribution formed only 9.61 per cent of the total, with the non- oil sector accounting for the rest.

This is despite an increase in the daily oil production to an average of 2.0 million barrels per day (mbpd), higher than the 1.95 mbpd in the fourth quarter of 2017.

In comparison, non-oil sector grew by 0.76 per cent in real terms.

The sector’s growth  was driven mainly by agriculture (crop production),  financial institutions and insurance, manufacturing, transportation and storage as well as information and communication.

The bureau stated that the figure shows a stronger growth, compared with the first quarter of 2017, which recorded a growth of –0.91 per cent, indicating an increase of 2.87 per cent points.

Quarter on quarter, real GDP growth was -13.40% as  oil production estimates for the third and fourth quarters of 2017 have been revised and oil GDP for those quarters have been adjusted.

According to NBS figures, aggregate GDP for the first quarter stood at N28.4 trillion in nominal terms.

”This performance is higher when compared to the first quarter of 2017 which recorded a nominal GDP aggregate of N26.028 trillion, thus -presenting a positive year- on-year nominal growth rate of 9.36%. This rate of growth is however lower relative to growth recorded in Q1 2017 by -7.70% points at 17.06% but higher than the proceeding quarter by 2.14% points at 7.22%.

It’s In The Interest Of Our Youths To Keep The Peace,...

Udom Wins As Court of Appeal Upheld His Re-election