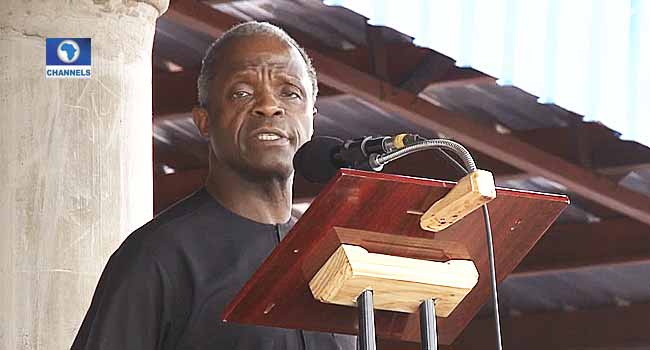 Vice President Yemi Osinbajo has called for the revamping and rebuilding of the Nigerian security architecture for greater efficiency and service delivery to the majority of Nigerians in rural communities.

Professor Osinbajo made the call on Tuesday, during the burial ceremony of two priests, who were murdered in the wake of killer herdsmen crisis in Benue state.

He made the resolution after the President of the Catholic Bishop Conference of Nigeria, Augustine Akubeze, demanded a probe of Nigeria’s security agencies, accusing them of underperformance.

According to the Vice President, though it is impossible to bring back the dead, security reforms have become necessary in order to ensure that the killings come to an end.

Also as part of efforts to ensure justice for the dead, he said the government will do all it can to punish the perpetrators.

“We can ensure justice for them by apprehending and punishing their assailants, we must rebuild the many places that have been damaged and heal the wounds that have been caused.

“We must revamp and rebuild our system of law enforcement to ensure that all those who live and work in this land are safe.

“Most importantly, we must, and we will stop these senseless killings.”

On his part, the state Governor, Samuel Ortom said the killing of the priests as well as 492 Persons since the beginning of the year, clearly indicates that there are other motives.

He also alleged that the mayhem is linked to threats by the leadership of Miyetti Allah to destabilize the state in opposition to the implementation of the anti-grazing law.

Catholics across the nation also took to the streets on the same day (Tuesday) to protest against incessant killings and attacks in the country.

The Catholic Archbishop of Lagos, Alfred Adewale Martins, in a telephone interview with Channels Television said the protest was in line with the directive from the Catholic Bishops Conference of Nigeria.

The Archbishop said, members, were urged to partake in the exercise in supplication to God and also in solidarity with those killed in Benue.