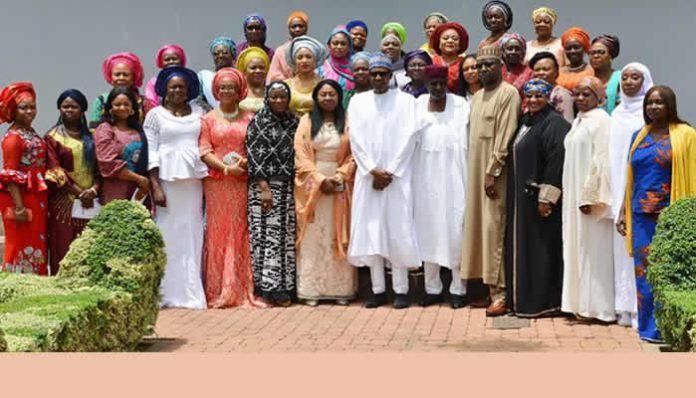 President Muhammadu Buhari has told the female members of the state Houses of Assembly nationwide that their request to have the post of the vice president reserved for women is a direct threat to Vice President Yemi Osinbajo.

Buhari said this on Friday when members of the Conference of Nigeria Female Parliamentarians visited him at the Presidential Villa, Abuja, during which they urged him to consider picking a female running mate for the 2019 presidential election.

Apart from the vice president slot, the female legislators also asked Buhari to make it compulsory for one out of three senators produced by each state of the federation to be a woman.

They also demanded that three out of nine members of the House of Representatives from each state should be a woman.

The leader of the delegation, Mrs. Elizabeth Ative, made the demands on behalf of her colleagues.

Ative said, “Currently, many African and European nations are daily finding ways to include more women in governance.

“Some have elected or appointed women as heads of state, prime ministers, heads of foreign ministries and other key positions of decision making.

“It will not be out of place, Your Excellency, for women to be given such opportunities in our dear nation. Even God created them male and female.”

In his response, Buhari jocularly told the women that their demand for a female vice president was a threat to the current holder of the office, Yemi Osinbajo.

Osinbajo was not present at the meeting which Buhari had with the female lawmakers.

“It is a pity that the vice president is not here; but I am sure the Secretary to the Government of the Federation will brief him that his position is (being) threatened,” the President replied.

Buhari also said that he had no constitutional powers to grant the third request that a particular number of federal lawmakers produced by each state should be women.

He said only a military dictator could make such a pronouncement.

“I am not all that powerful (such) that when I talk, it becomes a decree. As I said, it is only the vice president that is threatened,” he said.

He, however, thanked the women for their support and urged them to continue, especially as he has declared his intention to seek a re-election.

He also said that there was no truth in their belief that men were bent on marginalising women in the forthcoming general elections.

Ative had earlier claimed that female politicians are being marginalised by men. She, however, commended Buhari for what he called his “integrity.”

Ative said, “The impunity with which the former handlers embezzled with reckless abandon has become a thing of the past in our country because of Your Excellency’s doggedness, courage, firmness and integrity in standing for truth, fairness and equity.

“Politically, women account for over 50 percent of voters in any election. They are very loyal politicians and do not cross-carpet. They wait patiently to cast their votes under the rain and even in the scorching sun.

“It will interest Your Excellency to know that Nigeria is a signatory to several conventions and treaties supporting and encouraging the elimination of all forms of discrimination against women, women liberation and political participation such as the African Charter in Human Rights (1981).

“The Convention on the Elimination of all forms of discrimination against women (CEDAW, 1995), the Beijing Declaration and platform for action (1995), the goal No. 3 of the Millennium Development Goals No. 5 (SDGs), the Universal Declaration of Human Rights (UDHR) to but a few.

“However, Nigerian women have not been given their rightful place in the scheme of things. Women political empowerment in Nigeria ranks a lowly 111th position of 145 countries surveyed in the 2015 Global Gender Gap Report.

“Today, Nigeria falls short of the National Gender Policy benchmark of 35% minimum representation for women as well as the global and regional benchmarks of which she is a signatory, ranking 181 out of 193 countries in female representation according to statistics from inter parliamentary union.”

Abia Must Come First,Ikpeazu Says as he Receives Minister for State...