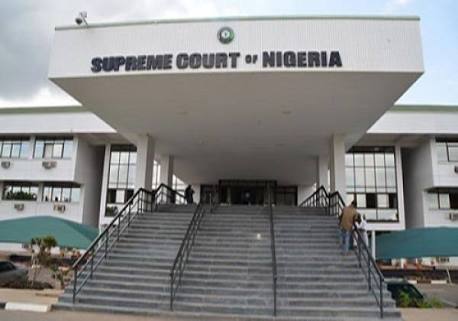 The Supreme Court on Friday ordered that the name of Late Brig.Gen. James Abdullahi be replaced with his wife, Elizabeth, in an appeal the deceased earlier brought against the Nigerian Army.

The other respondents are listed as Chief of Army Staff, Chief of Defence Staff and the Minister of Defence.

Justice Kumai Akaas while reading the ruling written by Justice Kudirat Kekere-Ekun, held that the decision was novel as it was guided by other considerations.

According to him, an action summarily would come to an end when an applicant in the matter dies, but that the prevailing circumstance surrounding the case warranted this intervention.

Akaas said the unanimous decision stemmed from the simple reasoning that all objections raised in the notice of appeal by the original applicant should still be considered on their merit.

He said there was merit in the application by the deceased’s widow to be substituted as the new appellant.

Elizabeth brought the application fundamentally under the powers conferred upon the court by Section 6 (6) (a) of the 1999 Constitution.

Elizabeth had prayed for an order substituting Abdullahi’s name for the purpose of continuing the prosecution.

She also prayed for an order granting her the leave to amend the notice of appeal filed by her late husband on May 22, 2009.

She said there was obvious challenge to the judgment of the court of appeal affirming the deceased applicant conviction.

Abdullahi was convicted to 10 years by General Court Martial on September 30, 2005 for offences of stealing various sums of money totaling N33.5m being property of the Nigerian Armed Forces.

The court also convicted him for a conduct prejudicial to good service and discipline.

The judgment, which purportedly affirmed the decision of the General Court Martial as confirmed by the Army Council, directed the forfeiture of the deceased landed property by way of restitution.

Meanwhile, the General Court Martial as confirmed by the Army Council had directed the deceased to refund N33.5m within 90 days or the property be confiscated to recover the amount.

The appellant had argued that the property, which the respondents purportedly confiscated to recover the said amount only was valued since January 20, 2005 at N83.1m.

The appellant had argued that the General Court Martial might have ordered the forfeiture of the property but that the decision of the confirming authority was for the properly to be confiscated to recover N33.5m.

Elizabeth, therefore, averred that the error noticed in the judgment had adversely affected her and the five children the marriage with Abdullahi produced.

The News Agency of Nigeria reports that no date has been fixed for the hearing of the appeal.

Whoever tries to rig election in Benue in 2023 should say...