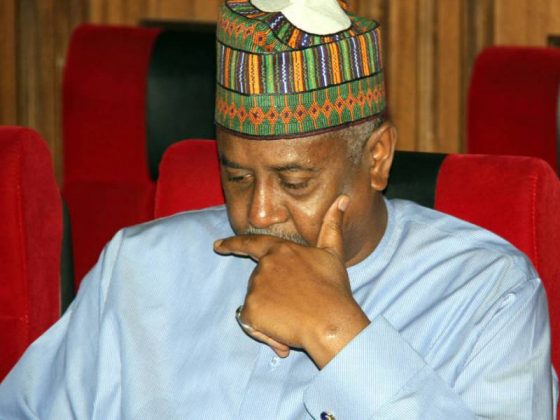 The AGF was, in the petition signed by Dasuki’s wife, Hajia Bintu Sambo Dasuki; his son, Abubakar Atiku, and his nephew, Senator Umar Dahiru, alleged to have engaged in conducts capable of causing anarchy in the country, by encouraging the Federal Government to disobey lawful court orders directing release of the ex-NSA on bail.

They alleged that Malami had in a media interview, made unprofessional remarks to the effect that the Federal Government would never comply with six separate court orders that gave Dasuki bail, pending his trial.

Malami had in the said interview, reportedly maintained that Dasuki’s continued detention since December 29, 2015, was justified, insisting that his action while in office as NSA led to the death of so many people.

However, Dasuki’s family contended that such remark was unbecoming for the AGF, who is the Chief Law Officer of the Federation.

They wondered why Malami, being a lawyer, would make unguided utterances capable of promoting disobedience to lawful court orders.

Dasuki’s family prayed NBA to invoke the code of ethics on Malami, investigate him and impose deserved disciplinary sanctions against him to safeguard the rule of law for the country.

According to the petitioners, Malami’s statement was prejudiced, unwarranted and unbecoming of a legal practitioner.

Besides, they urged the NBA to intervene in the ordeal being faced by the ex-NSA, take decisions and actions that would compel FG to respect the rule of law and obey all the subsisting court orders.

Before the latest judgment by Justice Ijeoma Ojukwu  of a Federal High Court, Abuja on his fundamental human rights, Dasuki had previously perfected bails granted him by four different judges of high courts including Justices Ademola Adeniyi and Justice Ahmed Mohammed of the Federal High Court, Abuja and Justice Hussein Baba-Yusuf and Peter Affen of the FCT High courts.

As well as “Whether upon a community reading and complete understanding of Sections 1(1), 150 (1) and 287(3) of the amended 1999 Constitution read alongside Rule 1 of the Rules of Professional Conduct for Legal Practitioners 2007, the Defendant has not desecrated the Nigerian Constitution, his oath of office both as the Attorney-General of the Federation and as a Senior Advocate of Nigeria in not only failing to support the Constitution but to assault same by his defence of the refusal of the Federal Government of Nigeria to release a former National Security Adviser [Rtd. Colonel Dasuki] despite valid court orders admitting him to bail?” Upon determination of the questions, the plaintiff among other things, wants “A solemn declaration of this Honourable Court that the Defendant is unfit and unworthy to continue to bear the privileged rank of a Senior Advocate of Nigeria in view of the interview he granted and published on the 19th day of July, 2018 [by Premium Times online newspaper] wherein he defended, justified and approved of the violation of Section 287(3) of the amended 1999 Constitution by the Federal Government of Nigeria which otherwise he took a solemn oath to support and defend.