Home PUO NEWS Rivers Camp: I am a Jehovah Witness, I can’t recite the national... 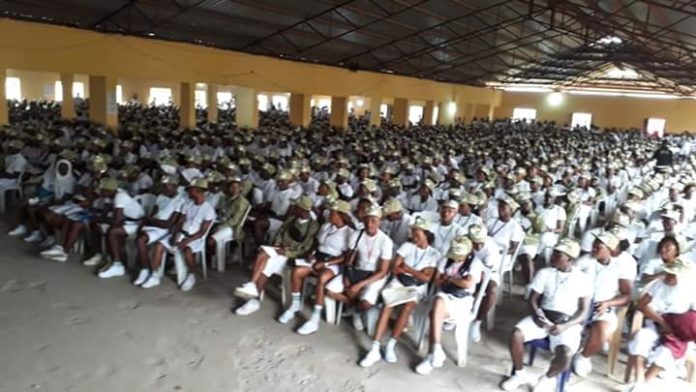 Yesterday (27th July, 2018) morning parade at the Rivers state NYSC ground witnessed a very surprising scene, as a corps member publicly and outrightly refused to join his colleague to recite the national anthem.

What began as an expensive joke that fateful morning turned out to be a serious matter, when he adamantly refused to recite the anthem, in spite of the parade commandant order to him to do so.

A book containing the anthem was handed over to him to read from, but the adamant Corps member did not read it.

The commandant asked him to either recite the anthem or leave the Camp. In tears, he packed his luggage immediately and left the camp on the stern instruction of the commandant.

Meanwhile, there is a speculation that the corps member may not truly be able to recite the national anthem and that he perhaps can not even read and that the religious excuse is just his means to escape from the public ridicule of his poor reading ability.

According to Miss Adewusi Kilanko, an eyewitness corps member, “Although, he said it outrightly that it was against his Religion and as such, he won’t recite it, I still feel that guy may have a very bad reading ability, judging from his drama with the book presented to him to read from. Well, that’s my only interpretation of this matter. Or, what religion says one should not recite a national anthem?”

On the other hand, in a chat with Town Crier, Mr. Osasuyi Jeffery, a Jehovah Witness faithful, who applauded the Corps member’s resistance wrote thus:

“I pledge to Nigeria my country, to be faithful loyal and honest, to serve Nigerian with all my strength, to defend her unity and uphold her honor and glory, so help me God.”

Is a contradiction of the biblical verse Luke 10:27 which says:

The national anthem is an Oath of Allegiance which makes citizen loyal to the country and not to Jehovah.”

However, the Corps member is to appear before a court of law today for a proper hearing of the matter.