Home PUO OPINION How Alex Otti and Orji Uzor Kalu are under developing Abia through... 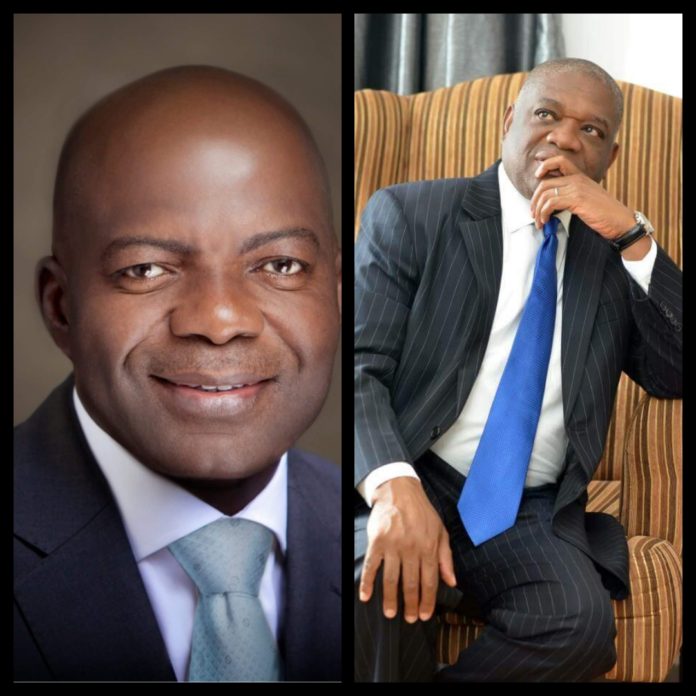 On Friday 27th of July 2018, the failed Special Adviser to President Buhari on Media and Publicity, Mr Femi Adesina, also known as “your land or your life” arrived Abia State and within 2 hours he achieved 2 personal life milestones courtesy of the defeated 2015 APGA Governorship candidate in the State, Dr Alex Otti:

1. He commissioned an uncompleted road purportedly “attracted” by Otti.

2. He was awarded a prestigious Igbo Chieftaincy title by a rogue traditional ruler whom Otti paid N100,000.

Interestingly, the road “commissioned” by Mr Adesina is at less than 30% completion status even as the project was listed as “remedial work on failed portions” as against “construction” or “reconstruction” of the road.

Clearly Mr Otti paid Femi Adesina to come and commission an ongoing road patching by NDDC and he abandoned his job as the President’s spokesman, at a crucial time, to dash to Abia State even though he was aware that the Minister of Niger Delta affair, Usani Uguru Usani and the Management of NDDC Led by Nsima Ekere were already in Abia State attending the 3rd Niger Delta Council.

It is clearly a confirmation of a disorganized Presidency that the media aide of President Buhari now takes money from politicians to “commission” uncompleted projects.

Yet what is more worrisome is the level of political desperation by Mr Otti that led him to arrange the so called commissioning of a project he purportedly “attracted”.

Otti is definitely not alone in the business of exploiting Abians under the guise of “attracting NDDC project”. That ruse was started by former Governor of Abia State, Orji Uzor Kalu, perfected by Honorable Ossy Prestige and made an art in deception by Alex Otti.

Apparently the management of NDDC and the Presidency vowed to ensure that NDDC never contributes meaningfully to the infrastructure capital of Abia State. While NDDC has executed durable road projects in other NDDC states, no single durable road exists in oil producing Abia State courtesy of NDDC.

Unscrupulous NDDC officials apparently use Abia State to divert the funds of the intervention agency by simply collaborating with desperate Abia politicians looking for cheap campaign funds and on a mission to deceive Abia voters.

The scheme involves the desperate politician providing a company that will be used to execute the scam and also help to choose a road where the youth of the area will not fight back. At the end of the day a poorly done road is delivered to the people and the Abia politician and his Presidency collaborators smile to the bank while also positioning themselves as lovers of the people.

Since this scam started, no single road done by NDDC in Abia State has survived one rainy season. In fact the people of Ozuitem in Abia State were so scandalized by one of the scam roads executed by Orji Uzor Kalu, using his Slok company that is currently facing criminal charges by EFCC that they trooped out to protest poor quality Uzuakoli-Ozuitem road when officials of the NDDC visited to inspect the road which Orji Uzor Kalu hitherto claimed he did with his personal funds as a philanthropic work.

Uzuakoli-Ozuitem road failed within 30 days of commissioning by NDDC. Same applies to Nkpa road also executed by Slok and many other scam NDDC roads in Abia State.

That Alex Otti has joined his political godfather, Orji Uzor Kalu, to scam Abians is not surprising given the long history of business and political association between the two. It was Orji that inducted Otti into Abia politics and used him to siphon state funds to various state and foreign accounts.

Indeed, many in Abia State believe that Otti taught and helped Kalu to execute many financial scams in the state including converting the state’s pension and federation allocation accounts to private funds. As a then banker, Otti helped to manage the accounts through first bank and later Diamond bank.

In all these, the question begging for answer is why Abia?

In other NDDC states grade A contractors are used to execute road projects but when it comes to Abia State all manner of discredited individuals and companies are awarded contracts running into billions of naira without supervision by relevant state agencies.

The case of Ohanku road Aba is still fresh. Honorable Ossy Prestige, just like Otti, claimed to have “attracted” NDDC to reconstruct the road and went ahead to execute an elaborate commissioning ceremony that Speaker Dogara was billed to attend. Days after the purported commissioning it rained and the whole road was washed off and residents of the area cried out to Governor Ikpeazu to come to their rescue and take over the road.

The procurement of Femi Adesina in the latest NDDC road scam in Abia raises questions on the involvement of President Muhammed Buhari in these scams. Is the president aware that his spokesman is now a certified road commissioner in Abia Stat? Did the President approve the commissioning of a road that is less than 30% completed?

It is therefore time for all Abians and Nigerians to ask Femi Adesina how much he was paid to execute the latest NDDC road scam in Abia. Was Adesina aware that the road he commissioned was less than 30% completed? Will Adesina be allowed to get away with such scams in the south west or northern Nigeria?