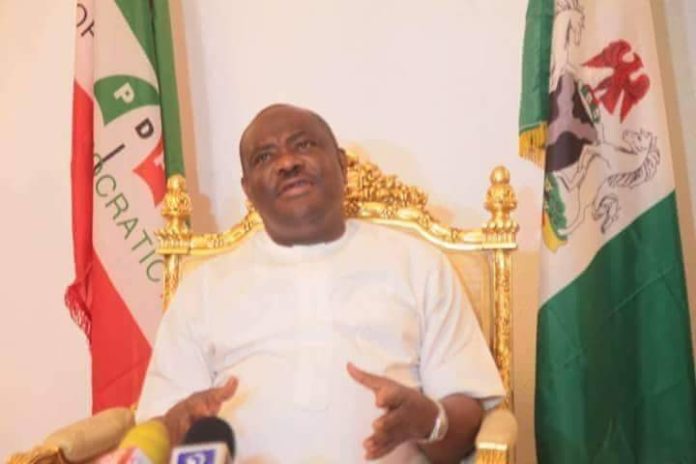 Rivers State Governor, Nyesom Ezenwo Wike has congratulated Senate President Bukola Saraki and Kwara State Governor, Abdulfatah Ahmed for their courage to defect to PDP despite the intimidation and harassment of the APC Federal Government.

Governor Wike further declared that the harassment and intimidation technique deployed by the APC Federal Government emboldens PDP leaders across the country to stand firm against tyranny, dictatorship and failed governance.

Addressing journalists on the defections of the Senate President Bukola Saraki and Kwara State Governor, Abdulfatah Ahmed on Tuesday at the Government House Port Harcourt, Governor Wike said the level of impunity under the APC Federal Government surpasses what was obtainable during the Military Administration.

“I salute the Senate President Bukola Saraki and Kwara State Governor for being bold to say that they will not be intimidated. I welcome them to the PDP which is being rebranded to take over the leadership of the country in 2019.

“More governors and senior politicians will still defect in the coming days. This regime of intimidation and harassment emboldens us . It strengthens us to stand against tyranny and impunity.

“It emboldens us to stand firm because of the interest of the people. We will resist any attempt to coerce us to cave in. Even under the Military, there has not been this nature of impunity. We are determined and we have made up our minds to rescue Nigeria “, Governor Wike said.

He noted that there is no hope to continue with this type of leadership which has abandoned her promises to the people. He said that the PDP represents the hope for Nigeria and good future for the country.

The Rivers State Governor said what is happening in Benue State is a classical case of the intimidation techniques of the APC Federal Government.

According to him, at what time did Governor Ortom and his aides commit crimes and money laundering offences that EFCC has been drafted to intimidate the state government.

He condemned the APC Federal Government for using security agencies to initiate an illegal impeachment process against Governor Ortom after he defected.

He said that in 2014, serving PDP Governors and National Assembly members defected to the APC without intimidation. He wondered why the APC Federal Government will resort to intimidation at this time, saying it will not save the sinking ship of the APC.