Home PUO OPINION Gales Of DEFECTION: End Of The Road For APC . By: Samuel... 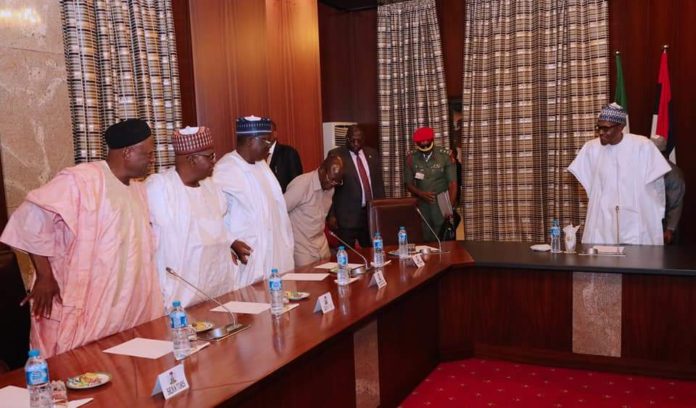 Few days ago, following the massive defections of over 35 parliamentarians at the federal level and other APC big guns to the People’s Democratic Party (PDP), the erstwhile Governor of Edo state and present national chairman of the All Progressive Congress (APC), comrade Adams Oshiomhole came out boldly to tell Nigerians that the Leadership of the ruling party would not lose sleep over the mass defection of some of its top notch political players.
.
The scattering of the broom does not mean much for the ruling All Progressive Congress. Oshiomhole and his party cronies have refused to come to grip with the situation currently dragging the APC to a state of quagmaire, even when the number one personality in our red Chamber, Dr. Olubukola Saraki yesterday dumbed the broom in pursuit of shelter under the Umbrella of the People’s Democratic Party, even when politicians from different nooks and crannies of this nation are dumping the APC for other parties on a daily basis, even when the APC has suddenly become minority in the Senate. For the APC, the political bigwigs that dumped the party were only mercenaries who were in the party to win election.
.
The Oshiomhole’s ideology, for those who are atone with the politics of this nation will agree with me that it is just a mere window dressing. It doesn’t hold water even a drop. It is in fact visible to the blind that all is not well with the APC. Things are really falling apart in the ruling All Progressive Congress.
.
The APC are indeed the architect of their misfortune. Their style of Governance which has so far brought pains and sufferings on the poor masses could probably be the reasons why they have decided to pitch their tent under the umbrella. This is because no right thinking citizen will want to vote or queue behind the APC who has a way of desecrating the rule of law and ethical values come 2019. The APC has indeed failed Nigerians. They have failed to bring the jaw, jaw which they promised Nigerians during the 2015 general election. They have no blue print agenda for Nigerians. The likes of Saraki and Dino Melaye may have decided to leave the party because of the flagrant humiliation the party has inflected on them for not dancing to the tone of those who claim to own the APC.
.
If the truth must be told, then it is germane to reveal at this juncture, that most of the political players who have decided to scamper for shelter under the umbrella are not saint either. They may not be tired of playing the politics of the APC, but may have envisaged that 2019 may be the end of the road for the Ruling All Progressive Congress.
.
It is high time Oshiomhole and his cohorts started losing sleep. It is obvious that the APC will fail woefully both at the State and Federal levels come 2019, all things being equal. To this end, those who claim to own the APC must immediately formulate strategies on how to restructure the party and make selfless service to Nigerians in particular, and humanity in general as their watchword, otherwise the party may very soon become defunct.
Nigeria must be better!
.
-Samuel Ejinwa, a public affairs analyst writes from Federal Capital Territory, Abuja.

An Aba Investment Summit 3 Years After? By Chinenye Nwaogu

Akwa Ibom Day Celebration and the woe of Civil Servants by...