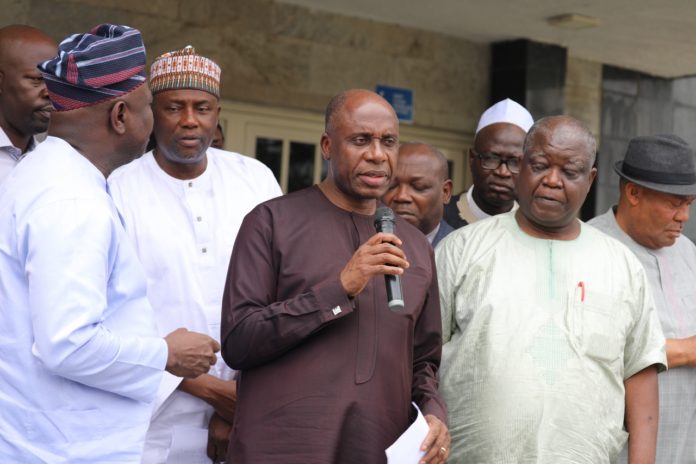 Spread the post
Honourable Minister of Transportation, Rt. Hon. Chibuike Rotimi Amaechi  today Visited Executive Governor of Lagos State, His Excellency Akinwunmi Ambode at the Lagos State Government House.
The Minister and the Governor held a closed door meeting at the Governor’s office, Government House, Lagos State.
A Statement by Mr Israel Ibeleme Media Aide to the Media said said the meeting is to find lasting Solution to the Construction of Railways in Lagos

“You will recall that the construction of railway project has been slow within Lagos State and its environs.
“The Minister of Transportation and the Governor of Lagos State is to find a lasting solution to the gray areas in the state.
“The meeting is to  provide solution for problematic areas in the Lagos-Ibadan railway modernization contract within  Lagos state, including Apapa Sea Port.
“Also both parties agreed that the construction works should commence next week, according to the Governor, the project will be completed within the period of twelve months.
The Governor thanked the Federal Government for their contributions, most especially the Honourable minister of Transportation,
for his effort in completion of rail projects in South West.

Shehu Sani reveals what will happen to journalists, bloggers if hate...