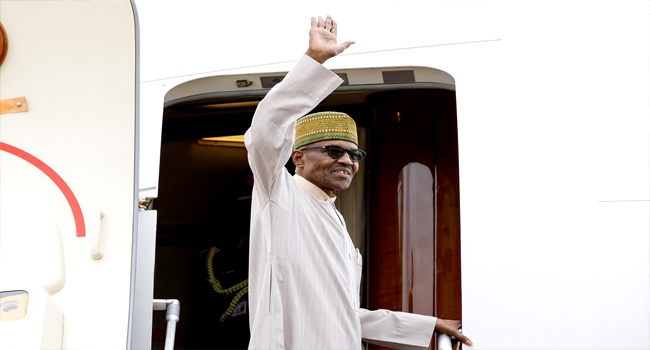 The Peoples Democratic Party, (PDP) has alleged that President Muhammadu Buhari’s two-week vacation in London was designed as an alibi to exonerate him from planned political illegalities, forceful invasion and mayhem about to be visited on the polity and particularly, the National Assembly.

The party is aware of plots already perfected in a meeting, on Wednesday night, between the Presidency and some compromised All Progressives Congress (APC) senators, who are now in the minority, to forcefully reconvene the Senate with protection from security agencies, with a view to impeach Senate President Bukola Saraki and Deputy Senate President Ike Ekweremadu.

The PDP knows that the desperation to illegally take control of the National Assembly is part of the design to undermine our democratic institutions and completely foist a dictatorial regime on our nation.

The planned invasion is also a bid to cover the atrocious and humongous corruption of the Buhari administration, which the National Assembly is set to expose.

The PDP has been reliably informed about how these APC senators, especially members of the Buhari Parliamentary Support Group (BPSG), have been provided with huge sums of money, illegally lifted from repatriated funds, to carry out this nefarious act under the guise of urgent need to approve funds for the 2019 general elections.

It is clear that President Buhari and the APC are hugely terrified and distressed by the gale of defections from their fold and have resorted to underhand methods, threats and intimidation, irrespective of the damage being inflicting on the polity.

Having been demeaned by the widespread condemnation of the recent siege on the residences of the Senate President and Deputy Senate President, in addition to the invasion of the Benue State House of Assembly in a failed attempt to impeach Governor Samuel Ortom and forcefully take over the state, President Buhari is now jetting out of the country so as to appear innocent and oblivious of the political terrors about to be unleashed on the National Assembly.

This is the same leader who, in 2014, applauded the defection of PDP members, including then leaders of the National Assembly, into his APC, describing the movement, then, as “good for democracy”.

Today, his administration is hounding and harassing citizens for daring to defect from his failed party.

Besides, Nigerians will recall that the PDP had earlier alerted of plots by President Buhari to enmesh the 2019 general election in controversy by asking for virement of funds already approved in the 2018 budget for development projects instead of sending a fresh supplementary budget for the election.

If the Presidency means well for Nigeria, it should have sent a supplementary budget and duly write the leadership of the National Assembly instead of plotting to forcefully take over the federal legislature and push our nation into serious constitutional crisis.

Despite their planned alibi, the PDP states that President Buhari must be held responsible for any abuse of power, disregard for rule of law and assault on democractic institutions, even in his absence from the country.

Finally, we wish to remind President Buhari and the APC that the PDP is now in incontrovertible majority in the Senate and we are ready and able to protect our democracy with all instruments available in the constitution and parliamentary rulebooks.