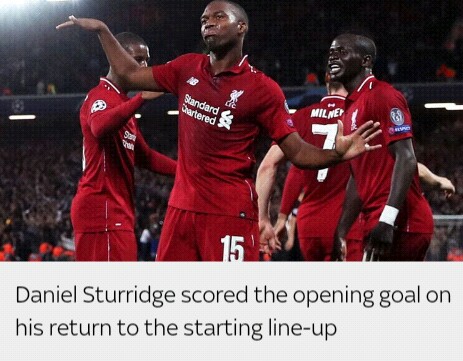 Roberto Firmino scored a stoppage-time winner to ensure Liverpool kicked off their Champions League campaign with a 3-2 victory over Paris Saint-Germain. Adam Bate was at Anfield to see why Jurgen Klopp’s team are real contenders to go all the way again.

Any suggestion that Liverpool should focus their energies on a Premier League title tilt might need a rethink. The 3-2 win over Paris Saint-Germain on Tuesday evening joins the pantheon of absorbing European nights at Anfield and only adds to the belief, stated beforehand by Jurgen Klopp, that Liverpool really do have a chance of beating anyone and everyone.

Roberto Firmino was the hero, coming off the bench to drill home in stoppage time, but in truth there were star performers in red all over the pitch. Perhaps there was a lesson or two to learn in the way that PSG came from two down to almost salvage a point through Kylian Mbappe’s late goal but it was Liverpool who did most of the schooling.

PSG went into the game having won all five of their league games this season, just like Liverpool. No team had kept the margin below two goals and Thomas Tuchel was even able to rest Neymar and Mbappe for the 4-0 win over Saint Etienne on Friday. But that was part of the problem. They were not as battle hardened as Liverpool.

They were not ready for what awaited them at Anfield.

Firmino wins it for Liverpool

Roberto Firmino came off the bench and scored a dramatic late winner as Liverpool beat Paris Saint-Germain 3-2 in their Champions League opener on Tuesday.

Klopp had said on the eve of the game that Liverpool’s opponents were “built to win the Champions League” but Anfield was built for nights like this. If PSG remain nouveau riche, Liverpool are old money. European royalty as the flag on the Kop says. The five-time winners against a team that has not reached a semi-final since the Qatari cash arrived.

The PSG supporters certainly made their presence felt on Anfield Road and indeed throughout the city centre beforehand. Inside the ground they were vocal, many stripped to the waist. But Klopp had called for a response in his programme notes. “Our place, our home, our Anfield on a European night.” The players were even roared off in the warm-up.

Thiago Silva’s decision to switch ends and ask the home side to attack the Kop in the first half might have seemed like a good idea in the dressing room but it soon looked like a bad toss to win. Perhaps the plan was to play the long game and avoid a frenzied finish. That did not work and PSG also had to navigate their way through Liverpool’s frenzied start first

The most corners that the French champions had faced in any game this season prior to Tuesday evening was seven. The Reds racked that up inside the first 15 minutes, peppering the PSG penalty box. There were no clear-cut opportunities but the intensity was palpable and the visitors had little time to settle into their usual rhythm.

Just when they looked to have ridden the storm, Andy Robertson whipped in a first-time cross of pace and accuracy that Daniel Sturridge dutifully headed home from close range. The Liverpool striker could not really hope to match the energy of Firmino but he did a passable impression and his eye for a goal remains undimmed.

Once more, PSG were in rare territory. There were no calls from the touchline for their opponents to get back into shape and hold on to the lead. Instead, there was the roar of the crowd encouraging their team to go for the kill. The second soon followed, James Milner converting from the spot after Gini Wijnaldum was fouled.

Milner was an appropriate scorer. He typified the occasion, drawing wild cheers when putting in an early tackle on Neymar. It was the first of many – four in the first half alone, more than any other player on the pitch and twice as many as anyone in a PSG shirt. It was even his pass down the line that led to the penalty.

Alongside him, skipper Jordan Henderson was hugely impressive too, his pressing relentless. One moment he was intercepting it on the left. The next, Wijnaldum was producing a driving run down the right. Klopp’s decision to ask Naby Keita to sample Anfield’s unique Champions League charms alongside Fabinho on the bench was fully justified.

PSG were far too good not to do some damage at the other end, of course. The menace was never far away. In a high-quality contest that could yet be repeated in the spring, every misplaced pass from Liverpool risked punishment on the counter-attack. So when Thomas Meunier pulled one back it was not a complete shock. It put the game back in the balance.

Since the start of last season, Liverpool have scored 44 Champions League goals, 11 more than any other team in the competition in this period.

For much of the second half, the anticipated push for an equaliser did not emerge. Instead, it was Klopp’s team in the ascendancy again. Mohamed Salah put the ball in the net only for referee Cuneyt Cakir to disallow the goal for a foul by Sturridge. Then Sturridge himself headed weakly when well placed to convert Trent Alexander-Arnold’s cross.

And just when victory seemed assured, PSG produced a moment of quality. Salah surrendered possession, Virgil van Dijk failed to make the challenge and Mbappe did the rest. It was a test of Liverpool’s resolve. They had to go and win the game again.

They might not have been attacking the Kop but attack they did and the winner was no more than they deserved. Liverpool had started the night as narrow favourites and they finished it as even narrower winners. But while the Premier League remains firmly in their sights, their Champions League chances look anything but slim on this evidence.

“We start from the beginning again – a new road and a new journey,” Klopp had noted. “Trying to measure or predict in this moment, before we play a single minute of a single game, how far we can progress in this specific competition is as futile as it is unhelpful.”

One game into the competition, Klopp’s mantra will remain the same. But from the first minute to the last, this was not the sort of performance to dampen expectations.