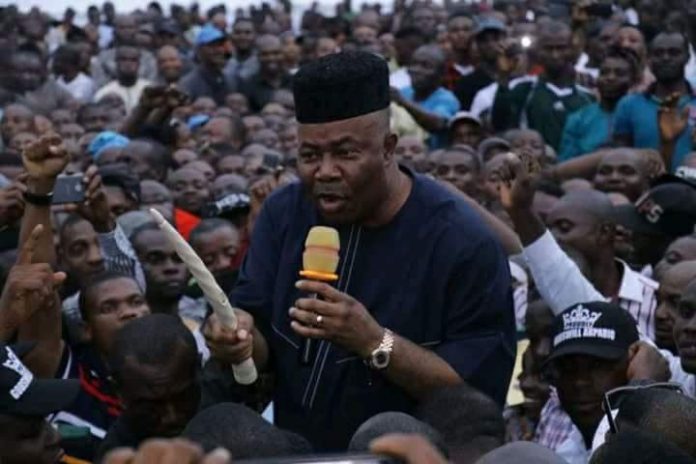 Former Akwa Ibom State Governor and Senator representing Akwa Ibom East is at the moment under investigation by the Central Bank of Nigeria, CBN, over suspicious cash lodgment in some commercial banks. The apex bank recently begins a discreet probe into suspicious N865billion cash deposits allegedly made by former Governor of Akwa Ibom State, Senator Godswill Akpabio in three banks in Uyo.

The monies were allegedly said to have being secretly kept in UBA bank, Polaris Bank and one other new generation bank with each of the bank managers in the State serving as “unofficial” account officers of the money.

“More shocking to the apex bank is the discovery that the monies were not paid into any known account but kept as ‘unrecorded’ cash deposits by the former Senate Minority Leader”, our source hinted.

Investigations revealed that the CBN traced over N200b to Polaris Bank as Akpabio’s “unrecorded” cash deposit, manage by a lady from Essien Udim LGA, hometown of the former Governor.

A source said, “the CBN discovered cash in dollars dumped and managed in the bank without any known account number but left to the care of the bank’s branch manager of one of the new generation bank in Uyo”

“The money allegedly belonging to the former Governor had no record of name of depositor or receivers account but has been warehoused in the bank for more than four years now, CBN investigation reveals.”

“The same scenario played out in UBA bank. We discovered this is happening under a private arrangement. This money discovered has no account name or number or name of depositor.”

Confirming the allegation, a member of the CBN’s audit team in Uyo who did not want his name in print because he is not authorized to speak to the press said “the discoveries were made during a routine secret audit of banks by the CBN following a tip off and we decided to do a discreet investigation without the knowledge of the three bank managers”.

“Some of the cash like the one found in the new generation bank is in dollar. The question the three bank managers have been unable to answer is how come the funds were secretly kept in the vaults of the bank and not paid into any valid account? How can a bank manager keep up to N200b in the vaults of the bank secretly without documentary or official record of how the money got to the bank? How do you manage such funds for years in your branch and claim you know nothing about the existence of such huge funds? It does not add up”.

The source said the CBN after its investigations will invite the EFCC if any case of culpability is established.

The discovery of the cash deposits inside sources confided in our reporter was made possible by some inside bank staffs who felt the bank managers were not sharing part of the Commission they were getting from Akpabio on the illegal storage of the funds.

It was gathered that most of the money were laundered when Akpabio was Governor.

Efforts to get the reaction of the Uyo Regional Managers of UBA bank, Polaris Bank and the other new generation bank proved abortive as all three declined to speak with our reporter on the issue insisting it was an “internal affairs”.