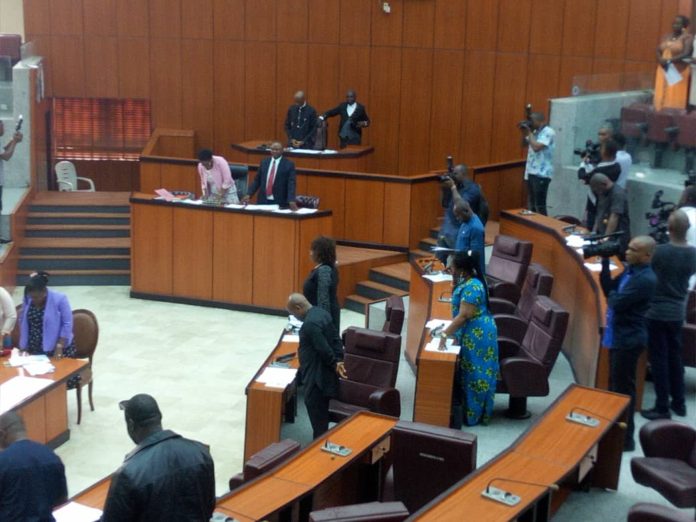 The Peoples Democratic Party (PDP) condemns the violent invasion of the Akwa-Ibom state House of Assembly by security forces allegedly working for the All Progressives Congress (APC) to forcefully take over the control of the legislature and destabilize the state.

It was a shocking scene at the Akwa Ibom House of Assembly on Tuesday, when the invading security forces shot sporadically and disrupted legislative activities in the attempt to assist the APC to forcefully overthrow the duly elected leadership of the state legislature.

The party also accuses the former governor of the state, Senator Godswill Akpabio, of stirring the violent invasion in keeping with his threats that the APC will overrun Akwa-Ibom state the same way Adolf Hitler overran Poland during the Second World War.

Nigerians are all aware of how Senator Akpabio declared war on Akwa-Ibom and boasted that “War shall see Warsaw and Warsaw shall see war” in the APC’s quest to take over the state; a mission that has apparently commenced with the violent invasion of the state legislative house.

The PDP is also aware of the role being played by security operatives, particularly the Police, in this ignoble scheme, which has the backing of the Buhari Presidency to destabilize the oil rich state ahead of the 2019 general election.

Our party had earlier alerted of the ploy by the Buhari Presidency to trigger violence in Akwa-Ibom state, create an impression that the state has become ungovernable, with a view to opening the way for a declaration of a state of emergency, which will enable them dismantle all democratic structures and forcefully take over control of the state.

The PDP cautions Senator Akpabio, the APC and the Presidency to note that their design is a recipe for national crisis, as the people of Akwa-Ibom state and indeed, all well-meaning Nigerians across board will never allow anybody to overrun the state or take over any arm of government by any means other than through the laid down process of free, fair and credible elections.

This reprehensible scheme, which failed in Benue state, cannot succeed in any part of our country, as Nigerians are now, more than ever before, willing, ready and able to protect our democracy with every means available within their rights as free citizens under the law.