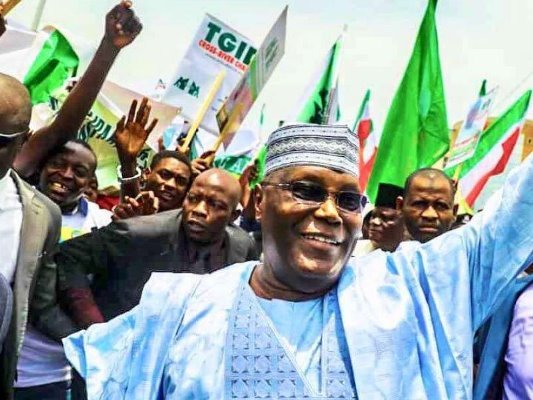 …As More Northern Groups Back Candidate

The Peoples Democratic Party (PDP) says Nigerians are eager to elect its Presidential candidate, Atiku Abubakar, as next President of the country because he has demonstrated that the essence of leadership lies in applying its powers and privileges for the good of others rather than self.

The party said unlike President Buhari, who has been rejected by Nigerians as a self-centered, uncaring, divisive and incompetent leader, whose administration relishes in inflicting pain, sorrow and hardship on others, Atiku Abubakar is generally accepted as a unifier, a broad-minded leader, who is committed to the welfare and uplifting of living standard of the citizens.

PDP National Publicity Secretary, Kola Ologbondiyan, stated the position of the party while receiving leaders of coalition of youth groups from Kano, Katsina and Kaduna states, who were at the PDP National Secretariat on Wednesday to register their decampment from the All Progressives Congress (APC) and their support for Atiku Abubakar ahead of the 2019 general elections.

Ologbondiyan said since the popular emergence of Atiku Abubakar as PDP Presidential candidate, the Buhari camp has continued to deplete in millions, adding that very soon President Buhari will find himself a “general without a troop, as Nigerians are no longer willing to blindly follow an incompetent leader, who thrives only on false promises, propaganda and procured endorsements.

“Nigerians have reached a consensus to rally with Atiku Abubakar, because unlike President Buhari, whose administration represents, hunger, starvation, violence, oppression and general national misfortune, Atiku Abubakar embodies a hope of national rebirth; it embodies democracy, unity and constitutional order; it embodies wealth creation, youth empowerment and that aspiration for a prosperous nation, where all are free.

“Nigerians know that unlike President Buhari, who cannot point to any contribution to our national economy, has not been able to successfully manage any enterprise and has no future blueprint for our nation. Atiku Abubakar is a world class entrepreneur, widely accepted as epitome of wealth creation and youth empowerment and whose policy direction provides practical answers to the challenges confronting our nation today. That is why Nigerians are eager to go to the polls. That is why they want to elect him as their next President”, Ologbondiyan said.

Speaking earlier, the Coordinator of the coalition, Mallam Yusuf Maikano, described President Buhari’s election in 2015 as “a huge mistake for which the nation has already paid dearly”, adding that “there is no way the nation can survive if President Buhari is allowed to lead for another four years”.

Maikano bemoaned that the Buhari administration has brought untold hardship to Nigerians, particularly in the north, who he said, “feel hugely betrayed by President Buhari’s failure to fulfill his 2015 campaign promises and now angered by his current posturing with false performance claims and list of fresh promises, instead of apologizing for his flops.”

There’s no godfatherism in Abia, my predecessors know where to draw...