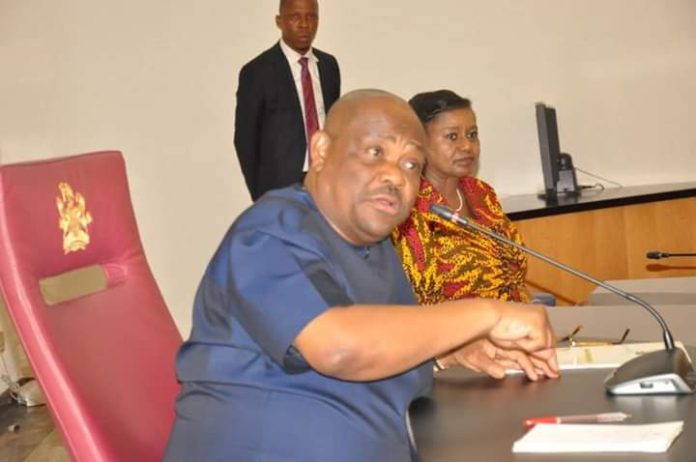 It has come to the knowledge of the CONCERNED DEMOCRATS and some well meaning people of Rivers state of a planned Dinner for Judges at all levels of courts in the state, being put together ostensibly by the Chief Judge of Rivers State, at the instance of Governor Nyesom Wike.

The said dinner which is tentatively slated for Monday December 3, 2018 is said to be plotted by the Chief Judge as a sleek opportunity for Governor Wike to pretend to gate-crash the artificial event and engage the Judges. We have it on good authority that Wike has concluded plans to make open “Greek gifts” and “Juicy offers” to the Judges in the guise of work incentives just to sway them unjustly for his planned dirty jobs as the campaigns for the 2019 elections begins.

As is usual with the governor, who cannot go one by one to visit the Judges in their respective homes, he has penned down those to be used to do the Yeo-Man’s job at various levels of the judiciary beginning with the State High Courts which are Courts of First instance, then upstairs. The governor has also lined up lists of frivolous cases, including malicious criminal trials; false charges, etc which shall be speedily ajudicated upon by these select Judges just to desperately try to compromise the integrity of certain opposition figures in the State for his selfish political purposes.

Furthermore, the state government under Wike has listed various categories of Commissions of Enquiry to be set up and targeted at opposition leaders, including some of the unbeatable signature programs and projects of the Rotimi Amaechi administration.

On this note we charge this class of Eminent Judges who have distinguished themselves unlike others, not to sell themselves and fall prey to such a dangerous entrapment at such a time when mundane gains will eventually destroy their hard earned reputations.

We further charge and challenge the Chief Judge of Rivers state to avoid being used as a tool by Nyesom Wike for these destructive missions. We call on her to instead uphold the sanctity of the Bench in the interest of our dear state. The Chief Judge must know that whereas she’s being seriously watched by Society who look up to the judiciary as the hope of the common man, she must not forget that she holds that office in trust and nothing more, not for partisan ends.

We insist and affirm that we as a group shall not hesitate to fully explore the multiple windows available to us to bring the Chief Judge of Rivers State to justice should she go on to do anything at all to compromise the course of justice in Rivers state.

Finally we advise the Rivers State Chief Judge to call off the staged dinner event and advice judges to stay away from this much publicised event, as there is no viable occasion in the legal calendar warranting such a suspicious and curious feast. Your people are watching.

Election: We may not obey INEC’s directive on campaign – APC

Wike Warns Against Use Of INEC And Security Agencies To Undermine...