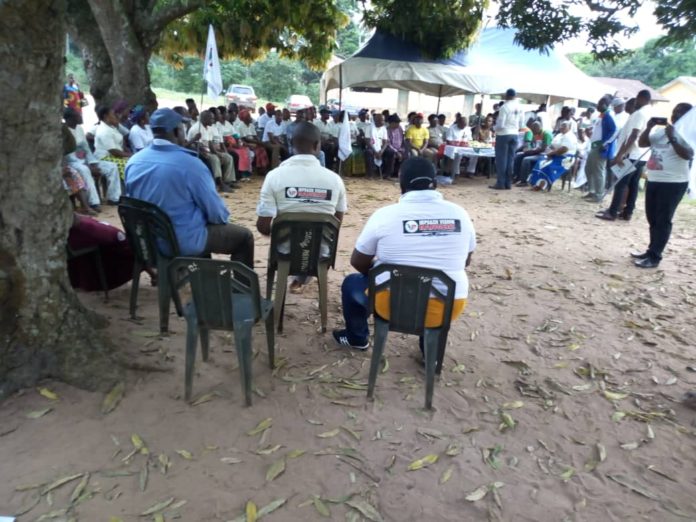 The second term bid of the Distingushed Senator representing Abia North Senatorial District at the National Assembly, Senator Dr. Mao Ohuabunwa has received a huge boost as Ikpeazu Vision Rangers ( IVR) Umunneochi Chapter has Endorsed and pledged their total Support towards the victory of the Senator And All the candidates of the Peoples Democratic party (PDP).

Speaking during the meeting/ endorsement of the Senator, the House of Representatives candidate of the PDP for Isuikwuato/ Umunneochi Federal Constituency, Barr. Jude Udeachara and the House of Assembly candidate of the PDP for Umunneochi State Constituency, Barr. Okey Philip Igwe at Isuochi, Umunneochi LGA, the Coordinator of the group in Umunneochi LGA, Hon. Ifeanyi Madu ( Ifeco) stated that it has become very imperative for them to Endorse the performing Senator dew to his Numerous Achievements So far for the people of Umunneochi LGA and Abia North in general so that the Senator will continue his good works, Hon. Ifeanyi said that the group are fully ready to deliver all the candidates of PDP in Umunneochi LGA.

Responding, Senator Mao Ohuabunwa, represented by the State Assistant Secretary of PDP in Abia State, Chief J. J. Okoro ( Enyioha) thanked the members of Ikpeazu Vision Rangers for the Endorsement and promised not to disappoint them, Senator Mao also used the Medium to eulogized members of IVR for their total support towards the Administration of Governor Okezie Ikpeazu and his Deputy, Sir Ude Oko Chukwu, Senator Mao advised them to go out and propagate the good works of the present Administration led by Dr. Okezie Ikpeazu and Sir, Ude Oko Chukwu.

Also Speaking, Barr. Jude Udeachara promised to give the people of Isuikwuato/Umunneochi Federal Constituency an effective representation at the green Chambers if elected, He thanked the Group for All the Support they have been giving PDP and promised not to let them down.

In his vote of thanks, one the Leaders of the organization, Barr. Iheji Nzube thanked Senator Mao Ohuabunwa, Barr. Jude Udeachara, and Barr. Okey Philip Igwe for all the good works they have been doing for the people of Umunneochi LGA and promised to replicate same to them by working hard for the victory of all the candidates of PDP comes 2019 .

The Event witnessed the presence of the Senator representing the good people of Abia North, Senator Mao Ohuabunwa represented by the State Assistant Secretary of PDP, Chief J. J. Okoro, the House of Representatives Candidate of the PDP for the Isuikwuato/Umunneochi Federal Constituency, Barr. Jude Udeachara, the Executive Chairman of Umunneochi LGA, Barr. Okey Philip Igwe represented by his Chief of Staff, Hon. Chimaobi Ocho and other notable Dignitaries.

INEC lacks power to withhold my Certificate of Return – Okorocha