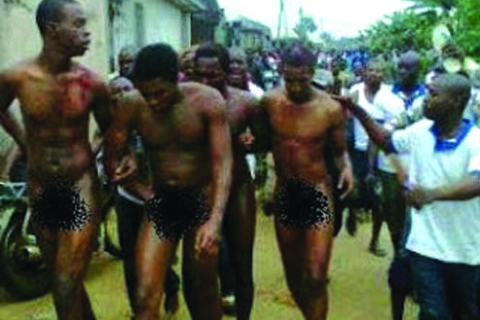 The Nigeria Police Force said it had arrested six suspects, (name withheld), for beating a 24 year-old woman accused of stealing a cell phone in Benin.

The Force Spokesman, ACP Frank Mba, who disclosed this in a statement on Thursday in Abuja, said the arrest of the suspects followed a video on the incident which recently went viral.

Mba said the Acting Inspector-General of Police, Mr Mohammed Adamu, had ordered a comprehensive investigation into the matter.

He said that the Police Command in Edo, led by its Commissioner of Police, Mr Hakeem Odumosu swung into action, leading to the breakthrough.

The force spokesman said that efforts were being intensified to arrest other two male suspects at large.

“The Nigeria police force condemns jungle justice in its entirety and warns of dire consequences for persons who resort to criminal acts of self-help,“ he said.

Mba said that the police had established contact with the victim, adding that her health status and recovery rate were also being monitored.

He said that the commissioner would be providing more details as the investigation progresses.

2019: Obasanjo will fail to push Buhari out if he opposes...