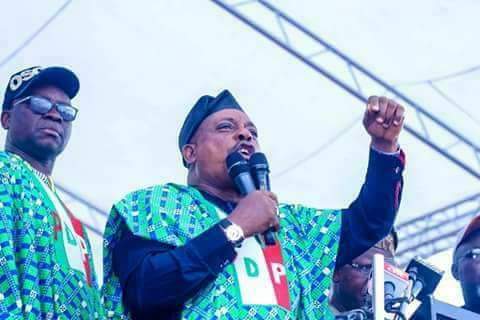 The National Chairman of the Peoples Democratic Party, PDP, Prince Uche Secondus, has declared that President Muhammadu Buhari and his ruling All Progressives Congress, APC, have failed the people of Katsina and Nigerians at large.

He warned the President to stop destroying institutions of state and not manipulate the electoral process.

Prince Secondus cried out that APC in their desperation and confusion was destroying institutions like the Police and the military by intervening on their day to day running, including determining posting of officers.

Katsina is the country home of President Buhari.

Prince Secondus said in a statement from his media office and signed by Ike Abonyi, that the APC was destroying institutions like Police and the military by trying to influence their postings for nefarious roles on the Election Day.

But the National Chairman reiterated his earlier position that PDP and its supporters will not accept the result of election not derived from the votes of the Nigerian people.

He told the jubilant supporters who shouted ‘Atiku! Atiku!’ that their large turn out showed clearly that their son the President failed them pointing out that hunger and poverty recognizes nobody.

“What President Buhari and his party bequeathed the people of Katsina and Nigeria in the last three and half years is not but hunger and unemployment,” he said.

Prince Secondus said that the incoming President the PDP was presenting to Nigeria, Atiku Abubakar, is a symbol of unity and a man who has excelled in public and private sectors and therefore well equipped to rescue Nigeria.

“They are threatening everybody including foreigners, they want to kill opposition leaders but they will never be able to kill the will of Nigeria people who have resolved to rescue their country from their hands,” he said.

The Presidential candidate, Atiku assured the people of Katsina that his Presidency will address the numerous challenges confronting the people which the APC administration has failed to address despite their promise to do it.

2023 presidency: We restate opposition to zoning, insist on competence –...

We Will Welcome Jonathan To The APC – Spokesman