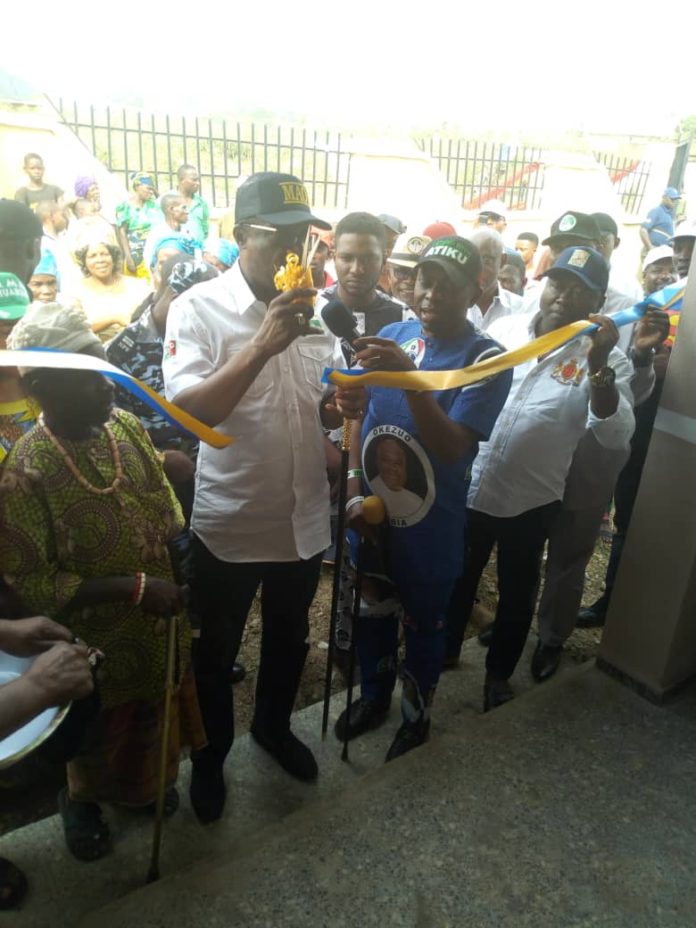 …Says More To Be Commissioned

Senator Mao thanked Ihechiowas for appreciating the success stories of his administration.

Venues for the commissioning of the project were almost turned to campaign grounds as Ihechiowa in their large numbers came out to appreciate senator Mao for delivering on electoral promises.

According to him, “I am excited that our people are happy with the projects we have executed; it is a thing of joy that through effective partnership you have created the enabling environment for us to meet with the requests you made during the town hall meetings.”

“We are paying a lot of attention to health; all over the constituency, our people are testifying that we have done very well, but, there are still many more projects to be constructed; the more we construct primary healths center’s, the more the demands for more projects,” he said, assuring, “we will continue to do more so that we will continue to get more demands because, health is very important for the socio-economic development of our people, our state.”

“I am grateful to Ihechiowas for giving us peace; peace has given a great boost to our revenue source; with improved revenue, peaceful disposition of our people and partnership, next four years will bring about more transformation of our communities, better days to us as a people,” he stated, disclosing, “in the coming days, we shall be to different communities to commission more projects.”

With few days to elections and the chanting of “Mao till 2023, Mao Again, Mao the Road Master,” among others, the senator Mao responded by telling the people to mobilise all eligible voters to cast their votes for the candidates of the Peoples Democratic Party (PDP) saying, “because our people are happy with us, we believe that God is happy with us and because God is happy with us, we are confident of victory at the polls.”

“We will continue to run a government that is people-oriented; I also believe that in this election that equity is something that you cannot do away with; the right of the people of Abia North to aspire for second term cannot be thrown away, if as one family, a united family in Abia State, with equity, and tolerance, we become a stronger family; it is our civic duty to vote and with your votes, you would have honoured the people of Abia North and stick to the zoning of political offices,” senator Mao stated at the occasions which had an array of traditional rulers in attendance.

President general, in an address, said, “our dear senator Mao, this particular kingdom has been transformed, by virtues of your famous campaign agenda that we can now conclude that the dreams of our fathers of old are now becoming reality.”

“The Ihechiowass count ourselves absolutely fortunate to be beneficiaries of your enigmatic leadership which has continued to bring succour to the masses,” Mr President said while the Chairman of Arochukwu local government Council, Hon. Kalu James kalu said, “our senator, the primary health Master of our time has done it again and we are very grateful indeed for your tenure has translated to good governance and showering of the dividends of democracy to our people; we will continue to testify that your land mark achievements which found expression in massive socio-economic transformation of the entire Abia north was not left to chances but, through your various articulated agenda, purposeful programme and laudable developmental projects aimed at improving our rural areas and enhancing quality of life.”

The former Chairman of Ohafia local government Council, Hon. Eke also, listed the achievements of Mao and assured him of the votes of Ohafia for PDP Candidates in the February 16 and March 2, 2019 elections.

I will complete all ongoing projects in Ekpeye land says ...