Home PUO POLITICS Enugu guber: I won’t be a cog in the wheel of state’s... 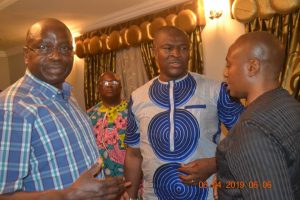 Senator Ayogu Eze, who contested in the just concluded governorship election in Enugu State, has stated that he won’t constitute a cog in the wheel of the progress of the state.

Sen. Eze, who spoke when a delegation of stakeholders of Enugu North Senatorial District visited him at his Enugu residence, weekend, acknowledged that “it is God that gives power”.

He reassured his kinsmen that “I will not be a destabilizing factor in Enugu State” or do anything that would jeopardize the progress of the state.

The visit, apparently in connection with the petition filed by Sen. Eze, at the election tribunal and the need for him to discontinue with the post-election battle for the unity and progress of Enugu State.

Speaking, the leader of the delegation, Senator Chukwuka Utazi told Sen. Eze that the visit was necessitated by the cherished spirit of oneness of Enugu people, particularly Enugu North Senatorial District.

Speaking further, Sen. Utazi added that the visit was therefore for Enugu people to work together as a family and support “our brother, Rt. Hon. Ifeanyi Ugwuanyi, the governor of Enugu State and the governor-elect” to advance the cause of development in the state for overall interest of the people.

Sen. Utazi who described Sen. Eze “one of the important personalities in Enugu State”, said: “As brothers, we have done elections, and we have concluded elections, and we don’t want to dissipate energy fighting electoral battles in court. We want to make sure that we stay together as a family and make sure that we have enough development for our people, not just in the senatorial zone but in Enugu State as a whole. We don’t want a situation where litigation will distract our governor from performing”.

According to him, “we are also here because our brother is important to us. As a very important person, a citizen of Enugu State and son of Enugu North Senatorial District, we cannot progress without him. Yes, we have played politics but let bygones be bygones, because it is God that gives leadership.

Responding, Sen. Eze, who appreciated the visit and told the delegation that “I won’t constitute a cog in the wheel of the progress of our people”, promised to consult with “one or two members of my party” and give them a feedback in a very short while, “on the direction I want to go”.

His words: “Politics is just a platform for bringing development to our people. It does not cut the ties that we have as brothers.

“I want you to know that I did not go to APC because there was any personal problem between me and anybody. I was seeking a platform to bring development to our people.

“I am humbled by your visit. I want to assure you that it will be out of place for me to just stand up today that you have come to give you my key response; I will talk to one or two members of my party, you will hear from me in a very short while on the direction I want to go. I will tell them that my brothers have come to me and this is what they brought on the table.

“So, I want to assure you that I will do all within my power to promote development within our State. I will not be a destabilizing factor in Enugu State. I just need to let you know that I won’t constitute a cog in the wheel of the progress of our people.”