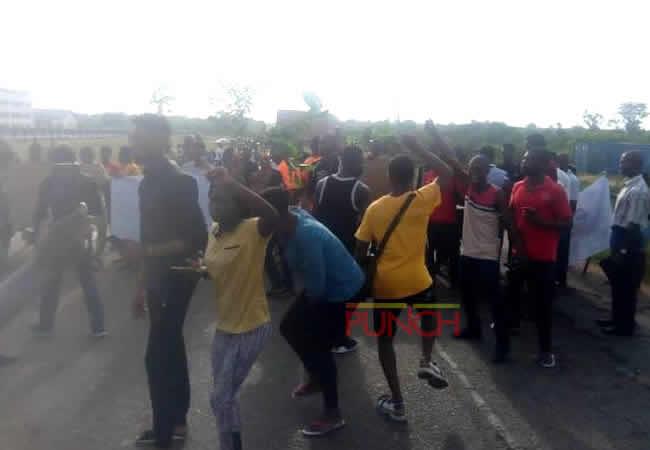 Hundreds of Amnesty students on scholarship at the Admiralty University, Delta State, under the Federal Government Amnesty programme, protested on Friday over the N25,000 training allowance being paid them, as against the N70,000 approved by the Presidential Amnesty Programme.

The beneficiaries, who blocked the roads, disrupted academic activities at the university and also stalled the movement of vehicles plying Asaba-Ibus-Ogwashi-Uku road.

One of the students who spoke on behalf of others, Peter Khama, said that the students in the last two weeks have had a series of issues concerning their N70,000 training allowance that has been reduced to N25,000.

“Why we are protesting this morning is because the school management made announcement on Thursday that anybody who did not agree to the term and conditions should quit the school premises, and this did not go down well with us.

“There are other students in various schools under the amnesty programme receiving N70,000. Why is ours different?” he asked.

Meanwhile, Amnesty Office has advised beneficiaries of the schorlaships at Admiralty University who are opposed to the institution’s feeding policy and rejected the sponsorship letters to vacate the school premises and apply in writing to the Presidential Amnesty Programme for redeployment to other universities for the next academic session.

This followed the rejection of sponsorship letters by some beneficiaries offered admission by the university for the current academic session on the grounds that the centralized feeding arrangement by the institution is unacceptable to them.

The Media Assistance to Coordinator of the Amnesty Office, Murphy Ganagana, noted that part of the conditions for offer of admission to its 268 prospective students is compulsory provision of feeding by the institution for which the Amnesty Office agreed to pay N45,000 monthly for their feeding out of the N70,000 each beneficiary is entitled to as In-Training Allowance.