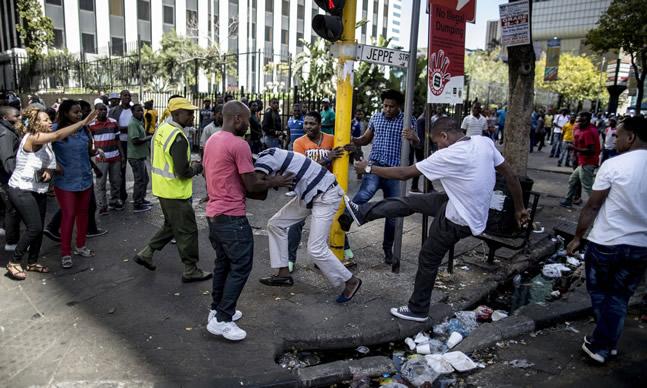 The death toll of Nigerians killed in South Africa has continued to rise, with another two being the latest victims in ongoing xenophobic attacks on foreigners in that country.

The latest victims were stabbed to death during xenophobic attacks in Johannesburg and Cape Town on April 5 and 6, 2019, respectively.

The Assistant Public Relations Officer, Nigeria Union in South Africa, Mr. Odefa Ikele, confirmed the killings in a telephone interview with the News Agency of Nigeria from Johannesburg on Monday.

”The Nigerian community lost two citizens to gruesome murders over the weekend.

“We gathered that his assailants followed him from 152 Hay Street Turffontein, and thereafter, stabbed and killed him in front of his gate at Turf Road, Turffontein.

“The killing was witnessed by Mr. Izochukwu Nwokocha, also known as, Nwa Father,” he said.

Ikele said the killing had been reported and a case of murder opened at Booysens Police Station in Johannesburg South.

He said that another Nigerian, Goziem Akpenyi, also lost his life in similar circumstances on April 5, 2019.

“Akpenyi was allegedly stabbed to death by three unknown coloured South African men after an argument with the deceased.

“The incident took place at Bellville Stadium parking lot in Cape Town at about 1 p.m. on Friday, April 5, 2019.

“These latest killings adds to four other Nigerians who were shot dead in March.

“Three of the victims were murdered in Sunnyside, Pretoria; and one in Balfour Park, Johannesburg,” he said.

Ikele said that NUSA was concerned over the incessant killings of Nigerians and worried that the perpetrators had not been brought to book.

According to him, the arrest and prosecution of the culprits by the South African Police would put to a stop the daily killings of Nigerians.

“We call on the Nigerian Government to impress on their South African counterpart that the killings have to be investigated and the culprits prosecuted,” he appealed.

2023 Presidency: Only Jonathan can consolidate on Buhari’s achievements – Group