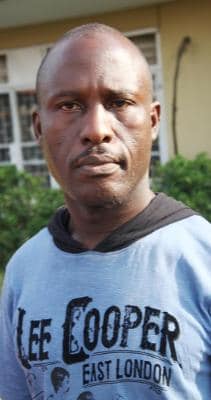 The Economic and Financial Crimes Commission, EFCC, Lagos Zonal office, on April 9, 2019, arraigned eight suspected members of a syndicate of illegal gold dealers before Justice A.O. Faji of the Federal High Court sitting in Ikoyi, Lagos on a three-count charge bordering on dealing in gold mine without lawful authorisation, conspiracy and being in possession of raw gold without lawful authorization.

The second suspect, Mannir, who was arrested onboard an Emirates flight to Dubai on March 1, 2019 at the Murtala Muhammed International Airport, Ikeja, Lagos, was allegedly helped by the third to eight defendants, who are employees of the Federal Airport Authority of Nigeria, FAAN.

The suspected FAAN staff allegedly carried the raw gold bars through various doors, while carefully avoiding going through the scanners provided at the airport and handed them to the second defendant at the point of boarding.

One of the counts reads: “That you, Babagana Zannah, Ahmed Hamza Mannir, Manasseh Auta, Dahiru Habib Bali, Isa Umaru Ammani , Ajakaye Oladipo, Bamanja Jonah Samuel and Lasisi Aisha, on or about 1st March, 2019 in Lagos, within the jurisdiction of this honourable court, conspired amongst yourselves to defraud the Federal Government of Nigeria of the revenue accruing from the export of gold mineral and without the permission of the appropriate authority and committed an offence contrary to Section 1(8)(a) of the Miscellaneous Offence Act punishable under the same Act.”

The defendants pleaded “not guilty” to the charge preferred against them.
In view of their pleas, the prosecuting counsel, Ayanfe Ogunsina, asked the court for a trial date and prayed that the defendants be remanded in prison.
However, Habeeb Oredola, counsel for the first and second defendants, and I.I. Chiahulamiro, counsel for the third to eight defendants respectively, informed the court of bail applications on behalf of their clients.

The defence counsels, in an application dated April 8, 2019, also prayed the court to grant their clients bail in the most liberal terms pending determination of the charge preferred against them.
Chiahulamiro further pleaded with the court that his clients are in the employ of the Federal Government and would not jump bail if granted.

However, Ogunsina, opposed the bail applications filed by the defence counsels, saying, “The punishment of this offence carries life imprisonment. And if the court is to use its discretion to grant bail, it should be in terms that the defendants will be present in court.”
Justice Faji adjourned the case to April 16, 2019 for ruling on the bail applications and ordered the defendants to be remanded in prison custody.