Home PUO POLITICS More Woes For Okorocha As Judge Accused Of Bias Withdraws From His... 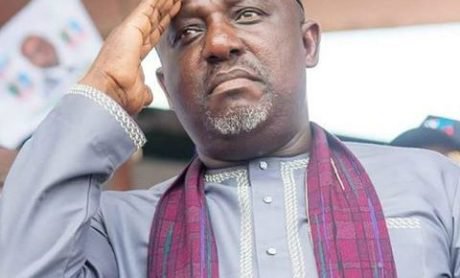 Justice Taiwo Taiwo of the Federal High Court, Abuja, on Wednessday recused himself from the suit filed by Rochas Okorocha, Governor of Imo State, in respect of his Certificate of Return.

Okorocha had gone to court seeking an order compelling the Indepedent National Electoral Commission (INEC) to issue him a Certificate of Return as the Senator-Elect for Imo West Senatorial District.

Justice Taiwo announced his decision on Wednessday when the case should have come up for hearing.

He said his decision to withdraw from adjudicating on the matter was based on allegations of bias against him.

He said the case file would be returned to the Justice Adamu Abdu-Kafarati, the Chief Judge of the Federal High Court, for reassignment to another judge.

The judge made it clear that the decision was premised on allegations of bias made against him by Jones Onyeriri and Senator Osita Izunaso, candidates of the Peoples Democratic Party (PDP) and All Progresssives Grand Alliance (APGA) respectively for the February 23 national assembly elections.

In his petition, Onyeriri had asked the Judge to disqualify himself from the suit because of the utterances he made in court.

Onyeriri said the utterances clearly prejudged the substantive issues that will be resolved in the matter and clearly shows he had taken sides with Okorocha.

An affidavit deposed to on his behalf by Mr Chijioke Nzekwe, a lawyer, stated that Justice Taiwo had, on Friday, told counsel to INEC, Wendy Kuku, that the commission was responsible for the problems in the election.

Nzekwe made his claim based on the previous statements of the judge, which claimed that he had read through the provisions of the Electoral Act, 2010 (as amended) and found nothing in it that robs him of the jurisdiction not to hear the suit.

“This pronouncement shocked all the counsel who were present in court and even members of the public and the Press who were in the gallery,” he said. “This is because the second and third defendants (INEC and Onyeriri) have notices pof Preliminary objection challenging the jurisdiction of the court to hear this matter.”

Izunaso, on his part, asked the court for an order transferring the suit to the Chief Judge of the Federal High Court for reassignment to any other judge.

In the motion filed by Orji Nwafor-Orizu, his counsel, an order of the court was sought to disqualify itself from further hearing the suit.

He premised his motion on the grounds that there was a likehood of bias on the part of the court to continue to hear the suit since the presiding judge, without hearing the suit, had expressed an opinion favourable to Okorocha.

“The said utterances were made on April 5 and they clearly pre-judged the substantive issues that will be resolved in this matter,” Izunaso said. “It clearly shows that the presiding judge has taken sides with the plaintiff.” SR

Oshiomhole is a misfit to lead APC – Shuaibu

APC Is Back As One United Family, Says Oyegun