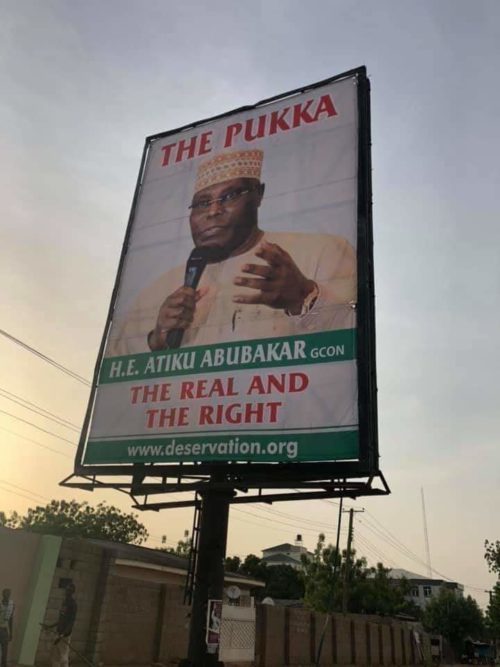 The Peoples Democratic Party (PDP) Presidential candidate, Atiku Abubakar has disowned campaign posters titled “The Pukka’’ that festooned some of the major streets of the Federal Capital Territory of Abuja.

Atiku disowned the posters in a statement issued by his media adviser, Mr Paul Ibe, on Wednesday.

The posters boldly carry Abubakar’s portrait and the message, ‘HE Atiku Abubakar GCON, The Real and The Right’, with a web address www.deservation.org, which the News Agency of Nigeria found belongs to a group of the same name based in Magaji/Sanda ward in Yola.

NAN correspondent in Yola confirmed that the posters have also appeared on some streets in the capital of Adamawa, Atiku’s home state.

Dr.Sani Adamu, the director-general of the Atiku Deservation Group, an Atiku Abubakar campaign group, claimed the group was not waging a political campaign or breaching the campaign rules of the Independent National Electoral Commission.

“Our attention has been drawn to posters of Abubakar, Presidential candidate of PDP in the 2019 election being circulated in Abuja”, said Paul Ibe in a statement.

“We dissociate the former Vice President of Nigeria from the said posters in circulation. The campaign season is over. The tainted electoral victory by the incumbent is being challenged in court.

“We refuse to be distracted, which is exactly the objective of our opponents, but to remain focused on diligently pursuing our election petition with a view to retrieving the stolen mandate.’’

Ibe earlier in an interview with the News Agency of Nigeria (NAN) said that the posters had nothing to do with the just concluded elections and the PDP Presidential Campaign Organization had no connection with it.

“I have not seen the posters. I am just hearing it from you. We are not aware of it. Whatever it is it not connected to the PDP campaign organisation.

“The campaign season has long been over but following the electoral hype by the All Progressives Congress (APC), Abubakar, as a democrat has submitted himself to the electoral tribunal to decide on matters arising from the concluded election.’’

A search on the web address (www.deservation.org) shows Atiku Deservation Movement (Project 774 for Atiku 2019) with RC 1167591 with the contact Magaji/Sanda Ward Yola South Adamawa State as well as phone number and a mail address.

The boldness of the campaign and the meaning it connotes have triggered questions whether the group behind it has not breached the electoral law. The campaign for presidential election began on 19 November 2018 and officially ended 48 hours to the election initially scheduled for 16 February, 2019.

Section 99(1) of the Electoral Act, 1999 as amended states that every political party shall commence campaigns 90 days before polling day and end 24 hours prior to that day.

Mr Rotimi Oyekanmi, the Chief Press Secretary to the Chairman of the Independent National Electoral Commission (INEC) in an interview with NAN, said that the posters could not be considered as campaign materials.

Oyekanmi, who said he had not seen any of the posters said if a poster has no party logo or name, the commission does not consider it to be campaign materials.

“Is there anything like party name or logo on it? If a poster does not contain any of these or ‘vote for a person’ the commission does not see it as campaign.The election is over and I wonder if anybody will be campaigning for an election that had been concluded,’’ Oyekanmi said.

Dr. Sani Adamu, the Executive Director of the Deservation group in a telephone interview with NAN, justified the poster’s PUKKA theme. He claimed that Alhaji Atiku Abubakar, candidate of the PDP in the just concluded presidential election is Nigeria’s authentic president.

Reminded that Abubakar already has a case before the presidential election petition tribunal, Adamu expressed confidence that Abubakar would get justice at the tribunal.

He insisted that the posters in circulation were not for campaign, adding that they did not carry the logo of any political party.

He also explained that the posters did not carry ‘vote’ Abubakar, insisting that it was not for campaign.

He said that the group was established to galvanise support for credible candidates that can make Nigeria great.

“We support only candidates and not political parties,” he said.

Abubakar was also recently reported to have hired two American lawyers, close to President Donald Trump, to lobby Trump’s inner circle and the Congress, so that the United States can delay recognising President Muhammadu Buhari as the elected President of Nigeria. He also wanted to be recognised ‘as the authentic President’ of Nigeria, going by the claims he has made at the tribunal.