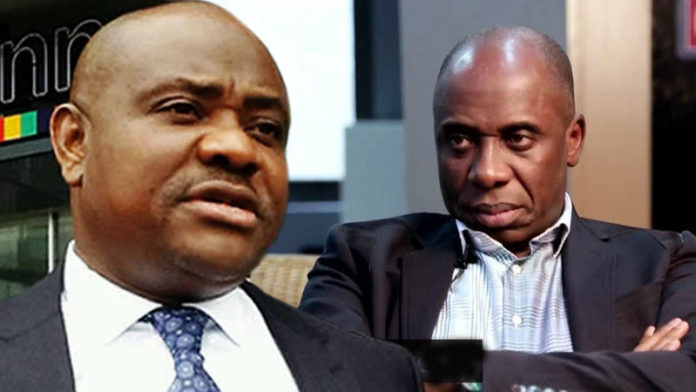 Rivers State Governor Nyesom Ezenwo Wike has called on Transportation Minister Chibuike Rotimi Amaechi to join hands with him to develop the state.

It was the end of the road yesterday for the Rivers State All Progressives Congress (APC) in its battle to unseat the Governor Nyesom Wike-led Peoples Democratic Party (PDP) government in the Southsouth state.

The Supreme Court struck out three appeals filed by the APC, its candidate in the governorship election Tonye Patrick Cole and members of his faction.

The governor, in a state broadcast to mark the landmark ruling by the apex court waved the olive branch. He said the state stood to benefit more if all leaders are united.

The governor specifically urged Amaechi, the leader of the APC in the state, to team up with him in developing the state.

He said: “Although the present politics of acrimony and bitterness may have strayed from the noble path of the past, I still believe that we shall be better if standing and working together for our state and our people.

”I therefore appeal to the APC and the Minister of Transportation to join hands with us to move our dear state forward. We cannot as leaders continue to remain divided and expect government to deliver on its responsibilities to our people. Let us from henceforth seek the common ground instead of allowing our differences to be exploited to retard our march to progress.

”I appeal to our people to eschew all acts of acrimony, criminality, unrest, and violence throughout the state. I wish to recommit myself to continue to do all that is humanly possible to ensure the unity and peaceful co-existence of all our people, irrespective of political affiliation”.

Wike directed the Attorney-General and Commissioner for Justice to review all pending criminal cases linked to politics before the 2019 elections and make necessary recommendations to promote reconciliation.

He said: “I hereby direct the Honourable Attorney-General and Commissioner for Justice to review all pending criminal proceedings filed against any person by the state and directly related to political activities prior to the 2019 general elections and make appropriate recommendations to me for necessary action to promote reconciliation among us.”

The governor pledged to run an inclusive government aimed at promoting the state.

He said: “Today, I recommit myself to be the Governor for all the people of Rivers State for the next four years. Accordingly, we shall form an all-inclusive government to advance the collective interest of all our people, irrespective of party, ethnic or religious affiliations.

“We have come a long way in the last four years and accomplished a lot to be proud of. But there’s still a lot more to do to advance and realise the ultimate vision of our founding fathers for a truly united, secure, and prosperous State and we need the support of all our people to realize this bold vision.

“We salute the opposition for their courage to fight within the confines of the law to the end. Now that the legal battle is over, the task of building the State must take precedence over all other considerations.”

Wike expressed gratitude to God for the Supreme Court judgment, assuring the people that with the judgment all legal tussles have come to a close with the people having nothing to fear.

He said: “Few hours ago, the Supreme Court of Nigeria struck out the consolidated appeals of the All Progressives Congress (APC) and Tonye Cole for lacking in merits.

“With this decision, all legal issues regarding the fielding of candidates by the APC for the 2019 National Assembly, Governorship and State House of Assembly elections in Rivers State have finally and permanently been put to rest.

“What this further means is that the victory of the Peoples Democratic Party (PDP) and its candidates in the 2019 National Assembly, governorship and State House of Assembly elections is legally safe, secured and protected.

“I wish to assure you that there is nothing else to fear or be worried about, as there is nothing more the APC or any other person can do to deny us the victory you freely gave to the PDP and its candidates.

“Let me also express my deepest gratitude to the people of Rivers State for the opportunity to serve you as your Governor for another four years. I am truly humbled by your continued trust and I will not take this support for granted.

According to him, yesterday’s ruling by the apex court once more heightened the dignity of the judiciary as the last hope of the common man.

Obuah, said in Port Harcourt, noted that having exhausted all avenues of defusing the choice of Wike by the mass of Rivers people, the APC had no choice but to acknowledge the obvious fact that the governor’s re-election had divine endorsement.

He hailed the wisdom and maturity exhibited by Wike, urging the governor to continue to see the state as one united and indivisible stock of God’s people.

Obuah said: “Members of PDP in Rivers State are delighted and will forever remain grateful to God for seeing them through all the stress and above all, granting the Rivers PDP undisputed victory at last.

“Today’s (yesterday’s) judgment of the Supreme Court striking out the consolidated appeals by the APC and Tonye Cole (the party’s governorship candidate) has ended the litigation by APC to put a wedge in the wheel of democratic governance in Rivers State.”

Why Enyinnaya Abaribe Must Apologise to Abia South People over Monumental...