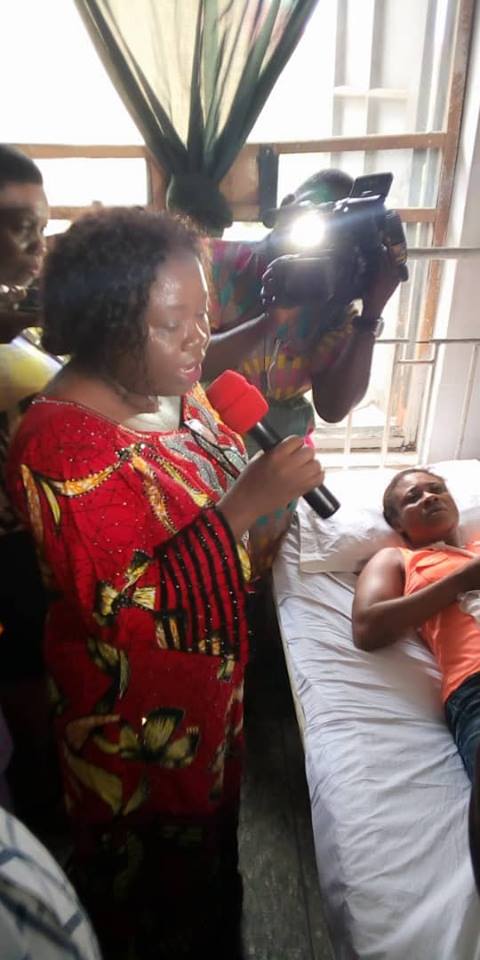 The wife of the Governor of Abia State, Mrs Nkechi Ikpeazu has paid visit to Miss. Esther Ibeneme a lady that sustained injuries from attack by herdsman at Aba.

The Governor’s wife, who paid the visit at Aba General Hospital, where she is receiving treatment said that government would no longer fold hands and watch herdsmen destroy lives and property in Abia State and ensure the matter is arrested.

The wife of the Governor appealed to the hospital to take appropriate care of the victim, assuring that government on its own would offset the costs of her treatment. She also assured that government would make sure appropriate measures of security are provided to ensure that that kind of situation does not arise again in State.

Also speaking, the Transition Committee Chairman, Aba North Local Government Area, Barr. Charles Esonu described the actions of the herdsmen as unfortunate, adding that it is becoming violent to the extent of threatening lives which may lead to reprisal attacks.

He enjoined Abia people to remain civil adding that government would use all its security apparatus to arrest the situation.

Miss. Esther Ibeneme had earlier explained that she was attacked by a herdsman with machete because she asked the herdsman who blocked her shop with cows to vacate the cows so that she can have access to her shop, after that, the next thing was to see herself being cut with a machete.

She thanked the Governor’s wife for coming to her rescue and paying the hospital bills and prayed God to bless her.

Anti-Buhari Graffiti: A Demonstration of Public Resentment To APC Misrule –...